Virginia Beach’s lethal rap duo had the odd job of headlining an otherwise indie-centric Rhapsody party at the Mohawk. But the same audience that had just finished hearing rock acts like British Sea Power and Sons and Daughters warmly welcomed the Clipse’s furious poetry. Before the Thornton brothers took the stage, a group of scruffy white kids were already bellowing out the name of their squad — ”R-E-U-P, G-A-N-G.” Once they arrived, the crowd eagerly rapped along to virtually every verse, even the ones from the brand-new We Got it for Cheap, Vol. 3 Mixtape.

A few fans hoped aloud that longtime Clipse mentor Pharrell Williams, in town for a N¤E¤R¤D show, might turn up; he didn’t (not a huge surprise, given the subtle tensions voiced on Vol. 3), but we did get cameos from their Re-Up Gang pals, Philadelphia’s Ab-Liva and Sandman. Considering how well those four complement each other’s lyrical styles, Williams’ absence was nothing to complain about, by any means.

They put me on a time limit,” Pharrell Williams informed the crowd at the Levis/Fader Fort with a sly smile. (Fair enough, considering that N¤E¤R¤D had started their set over an hour behind schedule.) ”But I’m kinda not giving a f— right now.” All right, then! Regardless of time pressures, the band — Williams, a newly bald Chad Hugo, their buddy Shay Haley, plus five back-up dudes — kept the crowd moshing with flashy funk-pop-metal-whatever songs (”Lapdance,” ”Rock Star,” ”Backseat Love”) drawn from their first two albums, as well as some material from this summer’s upcoming Seeing Sounds (”Everyone Nose”). The Clipse, meanwhile, were nowhere to be seen, but their Re-Up Gang cohorts Ab-Liva and Sandman enjoyed the N¤E¤R¤D show from off to the stage’s side, bringing the day full-circle.
*ew.com

Perhaps thanks to a terrible history with their record label, the Virginia Beach, Va., hip-hop act Clipse (who headlined the Rhapsody party Thursday afternoon at Mohawk) realized awhile back what everyone else in hip-hop needs to realize: The music no longer sells itself. For the past decade-plus, hip-hop sales have been (quite literally) money in the bank for major labels. The acts didn’t even have to tour all that much — just make a hit record and the fans will flock to it. This is no longer the case. Hip-hop took a 30 percent hit in sales last year, more than any other single genre. But The Clipse are prepared.

They tour like crazy and, as a result, have a tight live show that only seemed slightly off due to a late arrival into Austin (for which they apologized — when was the last time you heard a hip-hop act admit they weren’t on their A-game; mostly they just yell at the soundman). Malice and Pusha-T drew on their mixtapes with the Re-Up Gang (Re-Up member Ab-Liva joined them at one point) and their amazing 2006 album “Hell Hath No Fury,” including the smart cocaine-dealing allegory “Keys Open Doors” and the slightly snide lament “Momma, I’m So Sorry.” They tossed in their verses from New Orleans rapper Baby’s “What Happened To That Boy?” and “Hot Damn,” their track from The Neptunes’ “Clones” album. The Clipse work it and it pays off.
*austin360.com 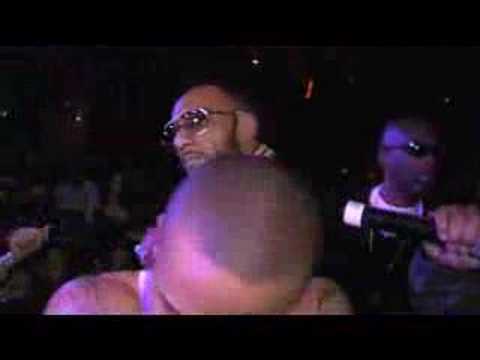