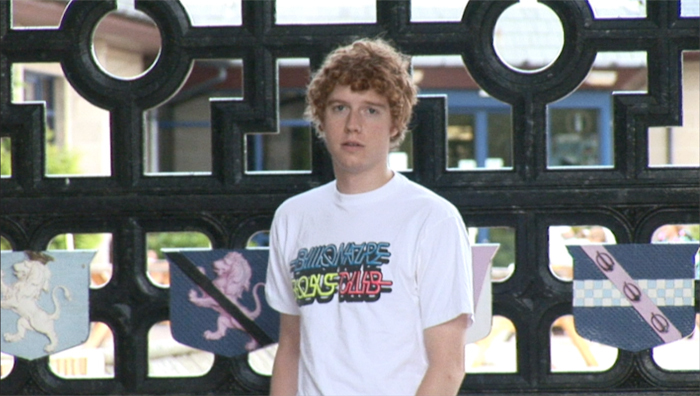 After waking up and getting our complimentary spray tans, we all pile into the van and prepare for the long drive from Manchester to Edinburgh, Scotland. There’s no show tonight, so today is just about taking it easy, resting and, most importantly, convincing our filmographer Lukas to finally put on a frickin’ shirt while riding in the van. We won’t go into details, other than the fact that he’s a hairy guy. After a couple hours of driving, we pull over so we can do a phone interview and then stretch our legs. Luckily, this rest stop happens to be one of the most beautiful locales we’ve seen the whole trip. To add to the “scenic” quality, the rain that had been billowing behind us for the past three days finally clears up and the sun pops out.

We grab some food and DVDs for the four additional hours we have ahead of us and jump back into the van. Most everyone naps for a couple of hours, but Lukas and Tyler decide to watch a movie instead. Because they’re nerds. We cross the border between England and Scotland and about an hour later we make another rest stop. This time, the scenic rest stop-ness has been stepped up even more because, to our surprise, this rest stop is inside a converted castle. After a few days of pure dude-age concentration, the van is stinking, so we air that mother out and then pile back in.

About an hour and some change later we pull into our hotel. Greg lets us know his friend has a show in the Edinburgh Fringe Festival that we’re all invited to… again, dude is incredible. So we put down our things and head into the heart of Edinburgh (the craziest looking city EVER??… pictures to come tomorrow) and load into Greg’s friend’s magic show. The show is hilarious and Manny is chosen to be a volunteer on stage, which is even funnier. After the show we hit up Pizza Express, get our drink-on for a lil’ while and then head to our hotel for some much-coveted sleep. Unfortunately, this time, our hotel doesn’t have spray on tan service. Bummer.
*myspace.com/chesterfrench