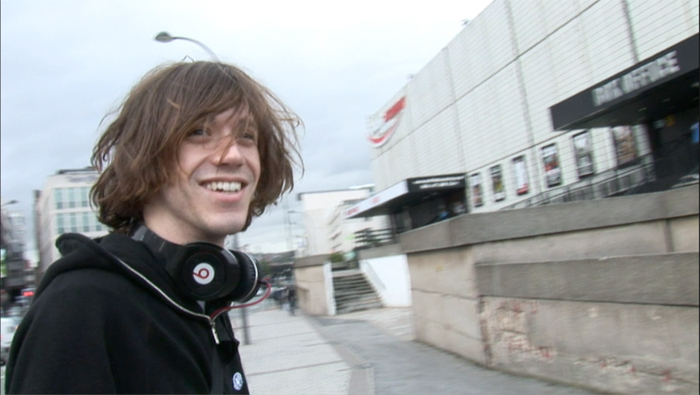 After a long flight from LA to London, Heathrow, we’re ready to hit our hotel rooms and rest. Unfortunately, we don’t have hotel rooms. Not in London, anyways. We’re heading to Sheffield to open up for N¤E¤R¤D and we have a three hour drive ahead of us. As we get off the plane, we load up the tour van and meet our tour manager, Greg. On our last tour with N¤E¤R¤D we didn’t have a tour manager, so we’re already loving Greg out the gate. But his barrage of hilarious jokes and off color (but appreciated) comments make us like him even more. He said everything was off the record, unfortunately, so we can’t quote him here.

After getting the gear in the van, we jump in and immediately pass out. When we all begin to wake up, we’re just outside of Sheffield and it’s pouring rain. Welcome to the UK! Once outside the venue, we load our gear in and wait around a bit before our sound-check. As we start to walk around the club, we all notice something… the floor of the venue is sticky. Really, really fuckin’ sticky. Like, anywhere we go, be it the pit, the carpets, wherever, it’s a literal chore to peel our feet off the ground to go from one step to another. Welcome to the UK? We sound-check and overcome some surly venue dudes (and one venue chick whose utility belt is apparently so heavy it keeps dragging her pants off…yikes), grab some clothes from the van and head to our dressing room back stage to change.

Max decides he’s going to wear a bandana over his face, bank-robber style, which he successfully pulls off until he has to perform vocal duties later in the show. We kick off the set with “Not Over You” and tear through about five more songs. The crowd is incredibly responsive, especially for an opening act. Welcome to the UK! (Okay, we promise, that’s the last “Welcome to the UK” in the entire tour diary). After the show, we head to N¤E¤R¤D’s dressing room and chat with Pharrell for a bit. We desperately want to catch their entire set as well, but we’re fading, man. Jet lag is catching up to us. So we… you guessed it… load in our gear onto the van and head to our hotel. We’re all starving at this point so we decide to order room service. While Max, Tyler, Manny and Omar seem to get regular meals delivered by regular hotel staff, DA and our videographer Lukas somehow end up on a different room service trajectory.

We’ll let Lukas tell it: “We wanted to get something we thought would be normal food, just because the menu had some weird, weird stuff on it. So I ordered a hamburger and DA ordered pasta with meatballs. So we ordered the food and just chill out and wait for a bit. Then DA falls asleep. He wakes up and then I fall asleep. “The food is taking forever. We try to watch some British soap operas, some soccer, er excuse me, FOOTBALL recaps on the news, etc. About an hour and fifteen minutes later, I’m pissed and I go, ‘When is this frickin’ food gonna get here?’ Exactly on cue, we hear some trays clanging outside the door.

But in addition, we hear some heavy breathing and the sound of some dude basically having a stroke outside. So I run to open the door. “Standing outside our door is, I swear to God, a midget bell hop struggling with our tray, breathing heavily and sweating all over himself. He had drenched his little midget bell hop outfit and was starting to drip onto our food as well. So I grabbed the tray and pulled it into the room. “‘Hol’ oh’, y’ez go’t tuh dukeez!’ the bell hop yelped in the strongest cockney accent I had ever heard. We had no idea what he was talking about. We were scared, so we let him run off, clicked off most of the lights and attended to our food. “Which wasn’t very good.

But it was solid, and like I said, we were scared, so we ate up. Then we went to sleep and slept in until about 11:15. “‘Dude, what time were we supposed to meet in the lobby to take off to Birmingham?’ I asked DA. He had no clue. We flicked on the lights and noticed, on the ground, there were two itineraries laying on the ground. AKA the documents, or ‘dukeez.’ “We were supposed to be down there 15 minutes ago. Oops. At least we had a valid excuse… we were scared to death of our midget bell hop.” The story above is 100% true.
*myspace.com/chesterfrench