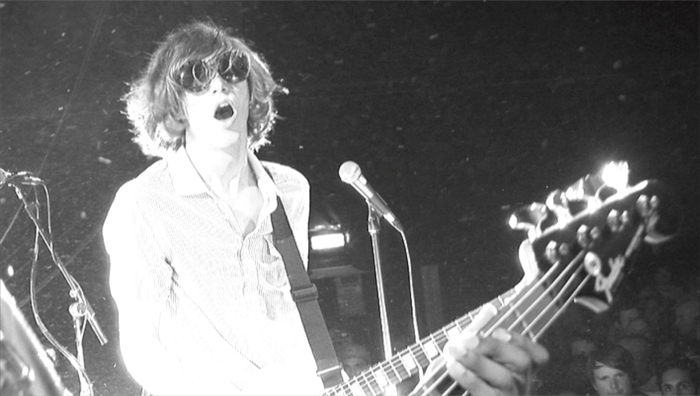 Goodbye Birmingham, hello Manchester. For a change of pace, we head to the hotel before we head to the venue. We’re staying at the very posh Malmaison (sidenote, you know how you can tell a hotel is nice? complimentary spray tan, baby!!!! yikes). After dropping off our suitcases and taking a short nap, we all head to the venue. As we’re heading in and getting our Artist Passes, our tour manager Greg gives us the slightly terrifying warning that Manchester can be a bit rough… and has apparently earned its nickname “Gunchester” for a reason. When Lukas and Tyler go out for some fish and chips later, they report back that Greg was exaggerating a bit… thankfully, no guns were seen our entire stay in Manchester. We do a sound-check while we send Lukas to go meet up with the fans waiting in line. There are a few friends we saw from the Birmingham show, which is really frickin’ awesome.

Afterwards, we hang backstage for a bit, do some press interviews and, like always, wait. While sitting around, we start discussing what artists come from Manchester… Oasis, Happy Mondays, Joy Division, The Smiths. All super dope bands. Looks like Manchester has a better musical pedigree than Birmingham! Waiiit… Greg reminds us… Black Sabbath is from Birmingham. Damn, we forgot about our chief influence. SAAABAAATTTTHHHH!!!!!!! Finally, it’s time to hit the stage… and we rock it, super hard. And the fans do too. This might be one of our best shows ever. It’s certainly one of the best responses from a crowd. Then we check out N¤E¤R¤D, who again rock the hell out of the show.

Afterwards, we’re all starving so we hightail it back to the hotel and attempt to get some dinner and drinks. Attempt because it’s rather difficult to maneuver the whole affair… the kitchen is about to close and there’s a very limited, very English menu left. We bite our lips and order. Thankfully, there’s no repeat of the Sheffield Room Service Affair. The food is good and, shockingly enough, it’s not brought out to us by a midget.. Around 2 or 3 AM, we’re all starting to fade, so we head up to our rooms. While walking around, we notice there are strange rooms every fourth or fifth room that don’t have numbers… they have names, like “The Dream Theater” or “The Funatorium.” Hmmm… None of us want to know what’s goin on in there, so we head to sleep without further comment.
*myspace.com/chesterfrench