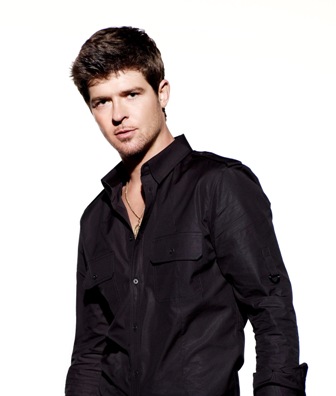 At the top of this phone interview, Robin Thicke jokingly refers to himself as a “wandering minstrel.” As the interview goes on, the 31-year-old Thicke, California-born son to ’80s TV dad Alan Thicke and soap star Gloria Loring, establishes himself as a man who doesn’t take himself too seriously. (He dots many a statement with that beach-bum stoner’s laugh of his.) He has plenty of reasons to be jovial these days. After making platinum-selling waves with his 2006 album “The Evolution Of Robin Thicke,” which contained that breakthrough, adult-contemporary R&B hit “Lost Without U,” he’s following up with “Something Else,” set for release at the end of the month. And now he’s on the road with the mighty Mary J. Blige as part of the Love-Soul Tour. “Working with her is just a gift, you know,” says Thicke, on the horn from New York. Thicke and Blige go way back, as they collaborated on a song Thicke penned. “I mean, just being around her, you learn so much about just letting it go and feeling the music, you know. Because that’s what she does.”

However, one thing he’s had to laugh off recently is the “controversy” that brewed between him and Vibe Magazine. Thicke stated in a Billboard article how disappointed he was that he wouldn’t be the cover boy for the October issue of Vibe. He said in the article: “When I did a recent interview with Vibe Magazine, I asked, ‘Why can’t I get the cover? This is a magazine I love. If there’s one magazine that I’d want to be on the cover of, it’s Vibe.’ Their response was they don’t have white artists on the cover; that the only white artist they’ve had on the cover was Eminem. I guess if that’s what it is, it is what it is.”(FYI: The issue has a nude Ciara on the cover. So that probably explains why he didn’t get it.) Although he went on to say that he doesn’t want to use the word “racism” to describe the magazine’s decision, online reports ran with it anyway, citing that Thicke called Vibe straight-up “racist.” Vibe editor-in-chief Danyel Smith even sent out a statement declaring that the magazine respects Thicke and “we remain flattered by his desire to be on a Vibe cover.”

“I mean, there was never anything negative said,” Thicke explains. “It was simply that it was my desire to be on the cover of the magazine, because it’s my favorite magazine. I was told by some of my friends who read the magazine a lot that the only covers they remembered being white people were Eminem and Gwen Stefani. So I just said, ‘Oh, well that’s too bad. I wish I could be on the cover.’ It was very simple.” For the record, Thicke is quite aware you have to pay your dues to be cover material. “You have to accomplish a lot in the world to deserve covers, you know. I mean, there’s nothing wrong with working a little harder.” Considering the long climb he’s had in becoming the solo soul singer he is today, it’s easy to see why he has to sit back and laugh at it all once in a while. After years as a songwriter, penning songs for such pop stars as Christina Aguilera, Jordan Knight, Usher and Marc Anthony, he became his own artist when he signed with Andre Harrell and Kenneth “Babyface” Edmonds’ Nu America Records.

His first album, “Cherry Blue Skies,” which had him billed as just Thicke, was scheduled for a fall 2002 release. But it was held back, probably to distance himself from another blue-eyed soul performer who had an album out at the time: Justin Timberlake. “Skies” was released the following spring under the name “A Beautiful World.” He wasn’t on the cover of his own album. (His future wife, actress Paula Patton, appeared nude on the cover, while the long-haired Thicke made the back.) Unfortunately, lack of promotion caused the album to be not the best-seller Thicke was hoping for. Salvation would come when Thicke found a fan in superproducer Pharrell Williams of The Neptunes, who signed him to his Star Trak Label and produced the single “Wanna Love U Girl” in 2005. “Evolution” would hit stores a year later. “It’s funny, you know, because I think it got everybody reinvigorated, you know,” says Thicke. “Because when they speak, people listen, which was a wonderful part of it. And Pharrell’s favorite song on the album was always ‘Lost Without U.’ He called it the first time he heard it, you know. So, I think he knew, ‘Hey, let’s let them know, let’s let the public know, that we approve this guy and we think he’s something to listen to.”

Pharrell wasn’t the only cat who was in Thicke’s corner. He also found himself collaborating with Lil’ Wayne, who added a verse or two on one of his “World” tracks. “My manager, at the time, was in New York and ran by him in the MTV building and he was like, ‘Oh, you manage Robin Thicke? I love his song ‘Shooter.’ I was gonna mess with it and put it on my new album. You think he’d be cool with that?’ And he was like, ‘You should give him a call.’ So, he called me up and I was like, ‘Absolutely. Go nuts.’ And it just became a cult classic, you know.” Thicke and Weezy also collaboed on a track on “Evolution” as well as a track on Wayne’s latest, “Tha Carter III.” That track, a post-Katrina ode to New Orleans called “Tie My Hands,” also appears on “Else.” But don’t expect the album to be inundated with guest shots. “I’m not really a guest-shot kinda guy. I mean, I got too much to say and too many different ways of saying it. But, if something happens organically, like that record did with Weezy, and if it’s just meant to be, it’s meant to be. But I never force that. I don’t finish the album and go, ‘Oh, I should change this and put somebody else on it.’ Unless it’s the right thing to do. And if it was, for the best of the song, I would do it.”

Everything else on “Else” has Thicke indulging in enjoyable R&B with a nostalgic feel. The first single, “Magic,” has the kind of old-school, horns-and-strings-enhanced sound that would make Curtis Mayfield proud. (Thicke claims he didn’t get into Mayfield until much later in his life: “No, I was listening to Jodeci more. But then I listened to Curtis after I got out of school.”) Thicke says it wasn’t his intention to go for a retro vibe on “Else.” “I’m never going for anything. I’m just making what I wanna hear. And, you know, I just do what I feel. I mean, I never really think it out, you know. And, at the end of it, I listen back and I go, ‘Oh, well I guess that’s what we did.’ “As local folk will get a pre-release taste of “Else” when he performs this weekend, Thicke has clearly made a name for himself as a clean-cut kid who can groove and soothe with the best of them. But he’s a clean-cut kid who also knows you always have to come with it in order to gain respect — and record sales. “You gotta earn your bones, you know,” he says. “Nobody’s ever given anything in this life, you know.”
*newsobserver.com