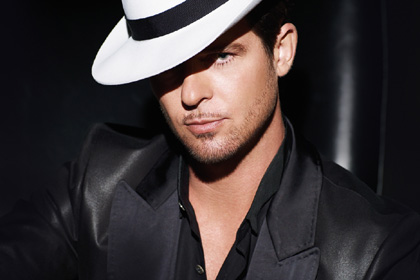 Singer and songwriter Robin Thicke is back in the mix with his hot new single “Magic,” which stands at Number Five on the urban adult radio chart this week. The single previews his anticipated third solo album Something Else, due on September 30th. While many exploding pop and R&B artists try to make the jump to film work, Thicke isn’t anxious to try his hand at acting. The son of acting parents Alan Thicke and Gloria Loring, and the husband of actress Paula Patton, Thicke says he’s satisfied to keep his screen appearances to music videos. Asked why video and not film, Thicke explained: “Yeah, because at least I’m acting the emotions in the song that I wrote. I mean, maybe if I wrote a script then I could act it, but I don’t think — I don’t know if it would be very easy for me to connect. No, I never liked the acting thing, it never came comfortably to me, it always felt like a force, you know. But you only live once, you know. If somebody offered me a load of money, who knows? I might have some fun.”
*kbsradio.ca