Goddamn it was about time, The High Speed Scene site has been updated. Here is what they said: Ladies and gentleman, the last couple years have seen some major changes and upheaval in the High Speed Scene camp. As you may or may not have noticed, we have taken an extended leave of absence from playing live as the High Speed Scene. All of us have been involved in various musical endeavors, including writing soundtracks, mixing records, recording albums, and touring with other bands. I would like to plug a great record that I had the pleasure to play keyboards and pedal steel guitar on, check out the new album Waiting For the Sunrise by my friend David Vandervelde. 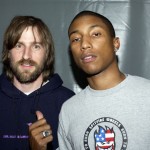 Adam and I (Max) are now part of the New York band We Are Scientists, and Domen is lost in Russia, according to the most recent sitings. That being said, we still have that long promised 6 Song EP in the can and I promise, promise, PROMISE that wee will put that out eventually. Life happened, we got sidetracked, short attention spans, you know the story. I hope you will come out and see us as part of We Are Scientists , if you like the High Speed Scene, you will love you some Scientists. Hope you are all well, and please stay in touch, people!  ~max. Damn, I never knew they’re part of We Are Scientists, I’m looking forward of some new High Speed Scene stuff.
*thehighspeedscene.com