Back in 2002, when Sweden’s Hives were being lumped in with the White Stripes and the Strokes in countless articles proclaiming rock and roll was here to stay again, it’s doubtful many people thought, “I bet those crazy Swedes will be recording with Pharrell and Timbaland before the decade’s out.” But sometimes life takes unexpected turns. And so it came to pass that the pride of the Swedish garage scene recruited a Neptune to bring in the funk on 2007’s The Black & White Album, producing two songs, Well All Right! and T.H.E.H.I.V.E.S. A third song, Throw It On Me, was produced by Timbaland, but by the time they got it done, it was too late to make the album, so it ended up on Timbaland’s Shock Value album instead. There was even a meeting with Andre 3000 of Outkast, but as luck would have it, he was busy filming Idlewild (how many reasons do we need to curse that film’s existence?) Lounging poolside on a rooftop in Brazil, Hives drummer Chris Dangerous says they’d been thinking of doing some work with Pharrell since 2004, when they met at a Japanese festival. 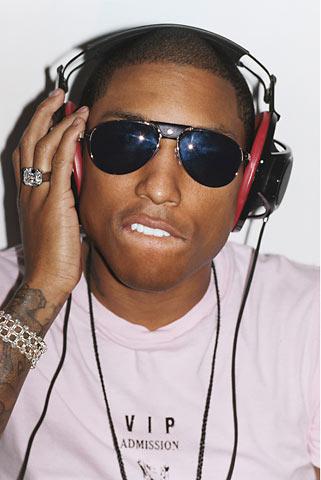 “He said that he would love to work with us,” he says. “And then, when we were sort of sketching out what was gonna be The Black & White Album, we thought about that because we had already sort of decided that we wanted to do something very different.” As to whether they worried that fans would be thrown by the sudden departure, Dangerous replies, “We didn’t really give [an expletive] because we never thought we were that popular doing what we did anyway. And our audience doesn’t come first. It’s the five of us who have to be excited by our music. And so far it’s worked out pretty good. We figure if we’re happy, the listeners would be too.” There’s still plenty for fans to be happy about on The Black & White Album, but the proof has long been in the live show with The Hives, who placed one spot ahead of Prince, at No. 8, in 2006, on Spin Magazine’s List Of 25 Best Current Live Bands.
*azcentral.com