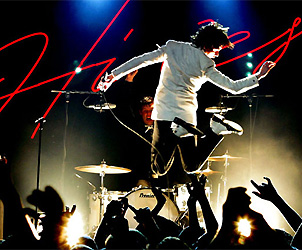 Humility has never been their strong suit. But since 2001, when the Hives exploded onto the garage rock revival scene in matching black-and-white suits, they have proved themselves to be at least partially worthy of their own hyperbole. In 2002, they were voted best live band in the world by Q magazine and eighth-best by Spin. But around the release of their third album, Tyrannosaurus Hives, the band of hyperactive Swedish poster boys for the law of attraction had a three-year scuffle with the law of gravity. While they would never publicly admit the need for a parachute, the Hives responded appropriately to their slow descent in popularity by “wood-shedding.” With a lot of help from their friends, they produced their most ambitious effort to date, Black and White (originally titled The World’s First Perfect Album).

You worked with a few producers on the record, including Pharrell Williams. Who challenged you the most?
In a way, the Pharrell stuff was most challenging because we wrote all that stuff in the studio the week we were there. We didn’t come in with finished songs, which is the way we had always done it before.

Where did you draw your inspiration from in that process?
We basically just hung out with Pharrell and listened to stuff on iTunes and talked about what we liked. Then someone would have an idea that would maybe turn into a song [or] maybe not. We were always intrigued with a period in the early ’80s when all the rock bands tried to get a disco hit. So we had talked with Pharrell before, and that’s what we were trying to do when we walked into the studio: a disco-rock number.
*vcreporter.com