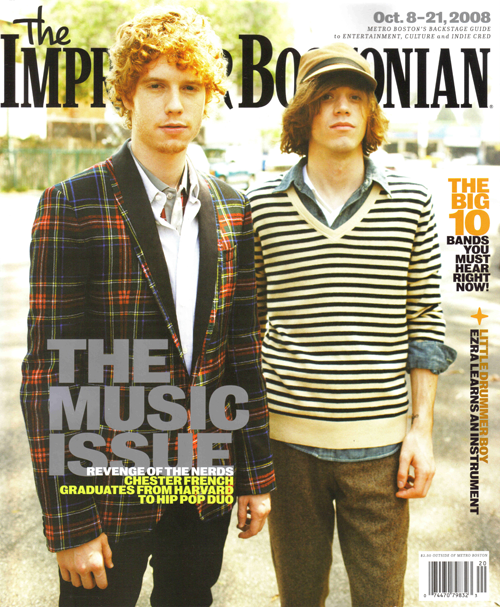 Pop sensation Chester French consists of Harvard grads Maxwell Drummey and D.A. Wallach. Having named their band after sculptor Daniel Chester French, who designed the John Harvard statue in the Yard, Boston-bred Drummey and Milwaukee-raised Wallach started performing together in college and quickly developed a campus following. The 23-year-olds landed a record deal when Hip Hop giant Pharrell Williams signed them to his Star Trak/Interscope label (Kanye West also made an offer). This year, Rolling Stone called the band “An Artist To Watch” and Spin Magazine featured them in its “Who’s Next ‘08” roundup of rising talent. Their song “She Loves Everybody” was featured on the HBO series “Entourage”. In August, Drummey married Peaches Geldof. He currently lives in New York, while Wallach lives in Milwaukee. 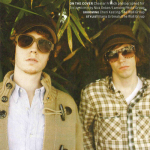 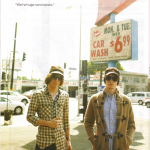 Jonathan Soroff: What are the odds that two Harward geeks become pop stars?
Max Drummey: One in five. It’s a misconception that Harvard is full of geeks. It’s actually the coolest place on earth. We account for 20 percent of the geeks who ever attended Harvard.

J: So who’s the better looking of the two of you?
D.A. Wallach: Obviously me. But I’d expect Max to say the same thing. We’re huge narcissists.

J: That would explain why you’ve been all over the European Fashion Magazines.
DA: Exactly. That was a weird one. We went out to a junkyard in L.A. a car graveyard, and they put us in crazy clothes. It started torrentially downpouring, and all the photography people freaked out because the very expensive clothing was getting wet. They called the shoot off and we left, but we still managed to get four pictures out of it.

J: Are you guys clotheshorses?
M: We wear clothes.

J: I was under the impression that you were the naked pop duo Chester French.
DA: Just on stage
M: I don’t even get naked to have sex.

J: What did your Harward education get you?
M: Older

J: Everyone tries to classify your music.
DA: It can’t be done. No way
M: I’m not even sure we’re musicians

J: Now that you’re stars, what’s your best sex, drugs and rock n’ roll story?
DA: I’m back home in Wisconsin, and I went to a Mothers Against Drunk Driving meeting last night. So that has something to do with drugs and alcohol, right?

J: Is it scary to be the Next Big Thing?
DA: No, it’s great. Our goal has always been to have as many people as possible hear our stuff and to not have day jobs besides music. So right now we’re closer to having that be a reality than we were three years ago.

J: Do either of you have day jobs?
M: Just for fun. I work part-time as a carpenter and wood carver, and I was a waiter at Denny’s for a while. That didn’t last too long, because I was eating too many Grand Slams and losing my physique. I had this other job for a while, panhandling. Some people don’t think it’s a job, but it’s work

J: Did you ever busk in Harvard Square?
DA: We did. The summer after our freshman year we created a little EP, and we sold it on the street. If people were reluctant to buy it, we’d offer to play them something live, with the agreement that if they liked our performance, they’d buy the CD for five bucks.

J: So exactly how much weed do you smoke?
M: Y’know, look, dude. None. Ever. I’m offended by this question.

J: What’s the biggest indulgence you’ve bought since hitting the big time?
M: I bought an indulgence for $300 from the Archdiocese of Boston, and I’ve been assured a place in heaven. It’s fantastic.

J: Who knew they were so cheap these days.
M: I know. And that’s adjusted for inflation.
DA: I bought a mobile home. A 72-foot luxury liner. Working toilet that never has to be emptied. It turns waste into edible brownies. It’s got a urine purifier. It’s totally tricked out.

J: So why do all the Hip Hop stars love you?
DA: they find it interesting that we’re the first artists to wear whiteface all the time, publicly.

J: Top three songs on your iPod?
M: The only thing I listen to is Gil Matnera’s Party Dream. They’re the only band worth listening to.
DA: I’ve got Tiny Tim’s greatest hits, and I just keep that spinning.

J: Anything you disagree on?
M: Nothing exept who’s more beautiful.

J: So how autobiographical are your songs?
M: They’re autobibliographical.

J: So is “She Loves Everybody” about a specific woman?
M: I don’t think it says anywhere in the song that she’s specifically human.

J: So you could be talking about a dog?
DA: Could be.

J: You seem a little fixated.
M: Well, if you ask what we do, I’ll just say it’s derivative of Gil Mantera’s Party Dream.

J: I smell a Grammy. How will you split it?
M: If I were to get one, it would be such an injustice that it didn’t go to Gil Mantera’s Party Dream, I’d give it to them.

J: Well, You’re a gentleman and a scholar.
M: You know who else is? Gil Mantera.