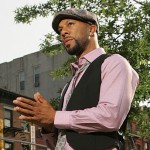 ‘I don’t wanna be predictable,’ MC says of Kanye only producing one song for Universal Mind Control. The veteran MC’s next LP, Universal Mind Control, is also heading in a new direction. Instead of Kanye West producing most of the LP, Common went with Mr. DJ (Outkast) and The Neptunes. “I felt that I made the change because it came real natural,” he said. “I was talking to Pharrell about working, and we went into the studio — me, him and Chad [Hugo]. When I make albums, I like to focus on maybe one or two producers. Pharrell, we both was making that magic. I was like, ‘Let’s keep going.’ ” By the time Common got to Kanye, his album was done. The Louis Vuitton Don did jump on a record called “Punch Drunk Love.” “I feel like me and ‘Ye, we always gonna make music together,” Common said. “It’s a good change of pace for us.

On the same token, you wanna keep people on their toes. I don’t wanna be predictable.” Common is so unpredictable these days that he had to switch the album’s title midway through production. It was originally planned to be an EP called Invincible Summer. “It was feeling like an album to me,” he said about getting deeper into the recording process. “And unfortunately, we missed the summer release. So I was like, ‘It can’t be called Invincible Summer anymore.’ And Universal Mind Control is the name of one of the songs. I like that for an album title. It kind of describes the music too. [The song] sounds futuristic, but it has an Afrika Bambaataa feel to it. I love what Hype [Williams] did with the video.” Other guests on the November 11 release include Star Trak Rock Group Chester French. They appear on a record called “What A World” that has a rock-and-roll feel. Common kicks rhymes on the track with an ’80s, Debbie Harry of Blondie feel.
*mtv.com