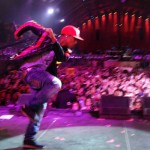 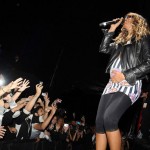 Yesterday Diesel hosted a 24 hour party in 18 cities around the globe. The party sparked in Tokyo and blazed like a California brush fire in Beijing, Dubai, Athens, Amsterdam, Milan, Zurich, Munich, Paris, Stockholm, Copenhagen, Barcelona, Oslo, Helsinki, London and Sao Paulo. The grand finale aka the night cap was on Pier 3 in Brooklyn, NY. Dubbed the “Rock and Roll Circus” T.I., Pharrell, M.I.A., Hot Chip and Chaka Khan performed for 5000 ‘friends’ and ‘trendsetters.’ The finale was provided by the heavily pregnant M.I.A. who came out of “retirement” to make a brief appearance which included a duet with N¤E¤R¤D who added their input on ‘Paper Planes’. Pharrell and the boys also found time to squeeze in a few numbers of their own and incite a stage invasion before the party finally came to a close at 2am. Although it had been strongly rumoured all week that he would show. 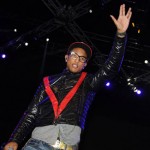 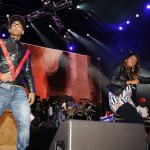