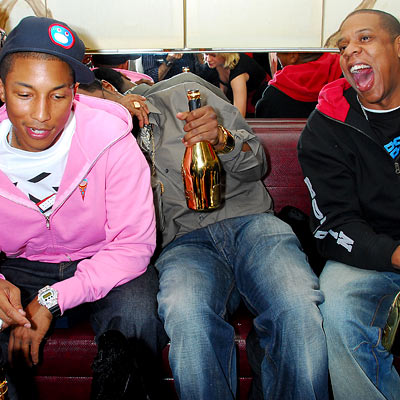 It doesn’t look like Jay-Z’s Blueprint 3 is coming out this year. There still hasn’t been a video for “Jockin’ Jay-Z (Dope Boy Fresh).” Matter of fact, there hasn’t been a word about the album in weeks, except that Hov is working on it. The only confirmed information is that Jay and Kanye West have done a bunch of tracks together, and the early talk was that Kanye would be the only producer on the album. That is looking more unlikely now. We’ve been hearing a bunch of rumors about other producers Jay is collaborating with (who shall remain nameless — we don’t do rumors, just facts). But one of those guys spoke to us recently: None other than Pharrell Williams, one of Jigga’s main go-to guys. “Of course,” he said when asked whether Jay had called him to work on Blueprint 3. He then took a long pause before refusing to divulge any more info. “He don’t like for you to say so much.” Williams is working with a lot of artists he can talk about right now. We were in the studio with him recently in Atlanta and had a sneak preview of some beats he did for Diddy and the Clipse. One Puff track that really stuck out has the potential to be huge if Diddy does it right. “Puff’s album is crazy,” Williams promised. “Y’all should know that. It’s pretty serious. It’s innovative. “[Lil] Wayne and I had an interesting conversation,” he added about his slate of production work. “We just did Fall Out Boy. We did Cassie, Jadakiss, going in with Fab[olous]. … I can’t think. It’s a bunch of stuff.”
*mtv.com