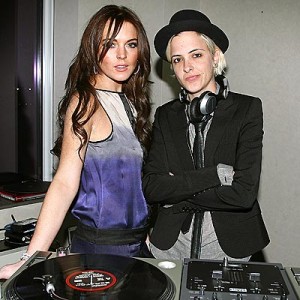 Lindsay Lohan has reportedly butted heads with her management over the artwork for her new album – because she wants to name check lover Samantha Ronson on the front cover. Since confirming Hollywood’s worst kept secret by acknowledging she is in a lesbian relationship with the DJ, the star is adamant that her latest record honours her ‘new’ love. Originally the dedication to Sam was discreetly hidden on the inside cover but, now they are an official couple, Lindsay wants her declaration to be glaringly obvious. A source tells The Sun, “Sam has had a huge influence on the record. “The artwork was finalised before Lindsay had gone public with the relationship, so she concealed the tribute. Now it will name Samantha directly.” The album – which is released on November 4 – features top producers N¤E¤R¤D, Pharrell Williams and soulful newcomer Sam Sparro.
*entertainmentwise.com