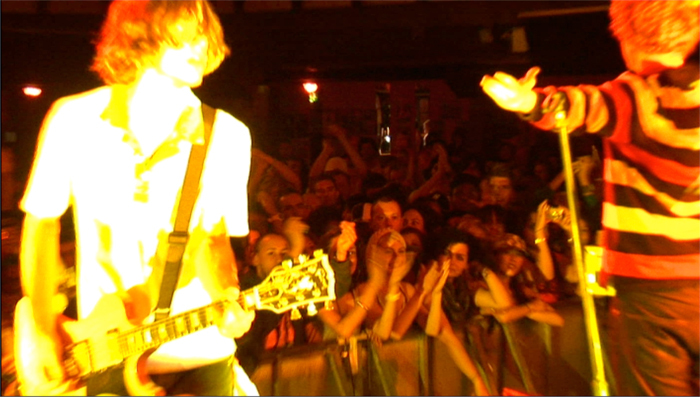 Max Drummey and David Andrew Wallach were technically Harvard grads before they were at the tipping point of rock stardom. So they get the concept. N¤E¤R¤D is essentially a rock band for people who don’t actually like rock but don’t necessarily hate it, either. Drummey and Wallach’s electro-dance-rock duo, Chester French, appeals to the same kind of crowd. “We’re both sort of trying to reach an audience that’s in between,” Wallach said Wednesday night at the Orpheum Theatre. Chester French was opening for rapper Common and Pharrell Williams’s pseudo-rock group N¤E¤R¤D and the crowd was a virtual Crayola box, from the after-work, white-collared middle-aged set to the college kids in Nikes and skinny jeans. It was the first time the group had performed in Boston since it was playing for a bunch of disinterested hipsters at Harpers Ferry. That was three years ago. They’re rock stars now. Or at least they’ve been touring like rock stars. 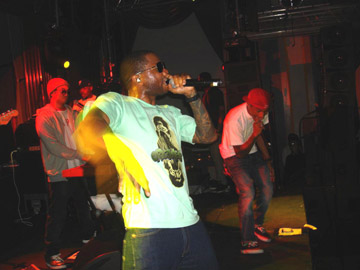 There were awkward moments in their 40-minute set, mostly the ones where Wallach would reach for a tambourine and hold it before the crowd as if it were self-mined uranium or the infant Jesus himself. But you expect that from two Cambridge guys who ditched the entire notion of live performance so they could spend all their time holed up to record the album they’re releasing in February. Chester French had the audience in its pocket and already warmed up when N¤E¤R¤D took the stage. Williams, without his other half, Chad Hugo, but in the company of a bunch of guys in white T’s and fitted caps, breezed through familiar songs like “Provider” and “Run To The Sun” and “Rock Star.” But on songs such as “Killjoy” and “Sooner Or Later,” he unleashed the suppressed rock impulses, kicking and punching to bridges where spikes of adrenaline built into sedated crashes, taking the crowd through the same drastic ebbs and flows. That energy always feels curbed when Williams is off playing super-producer for other artists. His latest project is Common’s upcoming party record album, “Universal Mind Control.”

Common seemed so giddy about the album that it almost took away from the whole sex-symbol angle he tried to play up for a show themed after a night in the club. He worked a live band around a set complete with an actual wet bar and girls on barstools. He even brought one girl, Michelle, from the front row to the stage to be his “date.” Somewhere in there, he rapped, barely touching on his classic rap records, and instead indulged in odes to sex and love that seem to flood his new album. The only moment he felt natural was when he freestyled, name-checking the Boston Tea Party, Kevin Garnett, David Ortiz, and Paul Pierce. There was a point in N¤E¤R¤D’s set where the group started pulling everybody with a N¤E¤R¤D shirt onstage so they could mosh. The stage was a mess, with fan boys in Billionaire Boys Club sweatshirts and T-shirts wandering around in N¤E¤R¤D’s makeshift mosh pit. They had been to the Orpheum, but in the crowd, not onstage. When Wallach rushed to join in the pile of people, you could see the line blurring. He had the look of a kid enjoying rock-star status while he had it. Then he went off to the stage to go push people.
*boston.com