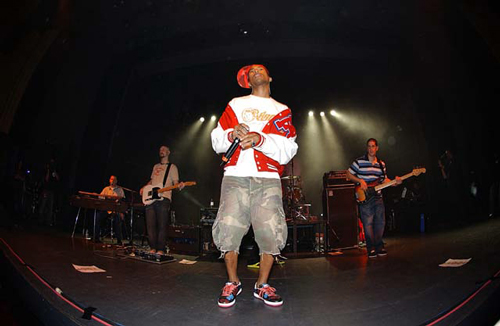 N¤E¤R¤D concert did little to disappoint the audience who came to see the double-bill at Hard Rock live. Armed with a live band that included not one, but two drummers playing simultaneously, N¤E¤R¤D members Pharrell and Shae launched into the roaring “Anti-Matter“; the first notes of the song’s guitar riff the only announcement of the band’s arrival on stage. The response was immediate: Several fans greeted the group’s Prince-meets-License To Ill-era Beastie Boys-meets-foam party at a sci-fi convention sound with hands giving the sign for “live long and prosper.” The sonic jihad continued followed by the twin assault of “Brain” and “Killjoy,” off N¤E¤R¤D’s premier album In Search Of… and newest venture Seeing Sounds , respectively. Pharrell, dressed in a T-shirt, jeans and a backward baseball cap, initially had trouble hearing him throughout the first few songs, signaling to have his mic turned up. 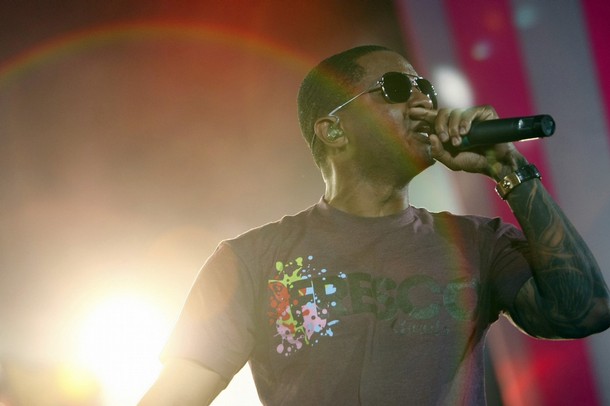 But these mishaps did little to ebb the energy of the evening. Pharrell seemed amped up almost to the point of aggression, introducing the Seeing Sounds ballad “Sooner Or Later,” (“…sooner or later / it all falls down…”) with a speech about the current state of the stock market. Later, Pharrell hand-picked male members of the audience to come onstage and dance with the band during the raucous “Lapdance,” which compares politicians to strippers, but not before a rallying cry to vote for Barack Obama in the upcoming election. After the song finished and the audience members went backstage, Pharrell called out one lucky fan named David who the band had met with at their hotel before the concert, and thanked him personally for being “a real N¤E¤R¤D fan.” Pharrell would bring more audience members on stage to dance with – this time all females – for “Everyone Nose (All The Girls Standing In The Line For The Bathroom)” and “She Wants To Move,” the sole representative number from N¤E¤R¤D’s second album, Fly Or Die.
*www.centralfloridafuture.com