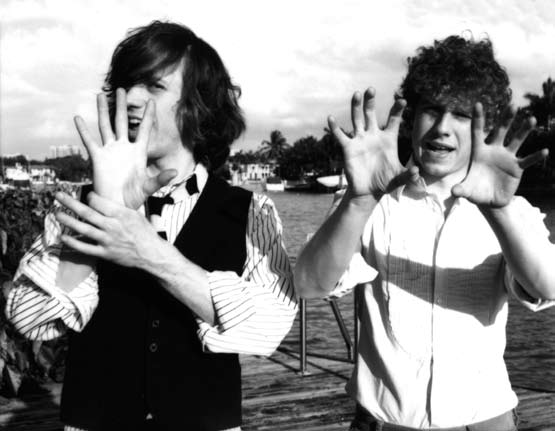 It’s not clear if very many people at Bowery Ballroom on Thursday night knew that D.A. Wallach of Chester French is a rock star, but he’s a rock star just the same. The attitude, the cocksureness, the outfit (late-’80s stockbroker on an outdoorsy weekend): he wears it all well. Chester French is signed to Star Trak, the Interscope imprint headed by The Neptunes, who have long had inexplicable taste in rock music (Hello, High Speed Scene! Spymob, phone home!) Chester French plunder the ’60s and ’70s in their scrappy yet slick songs, so is it blue-eyed glam soul? Prog-lounge? “Kind of Beatle-esque with, like, hints of Motown”? (Thanks, Pharrell!)

How about just pop? The members of Chester French — Mr. Wallach and Max Drummey, who met at Harvard — are shameless panderers masquerading as tastemakers. Their songs are, essentially, bawdy frat (or would that be finals club?) anthems, written with enough brains to sneak in a couple of smart jokes but not so much to skip the stupid ones. It didn’t all cohere — ambition and attitude are necessary, but not sufficient. Towards the end, Mr. Wallach left the stage and the rest of the band went instrumental for a while, playing jam-funk covers of Amerie’s “1 Thing” and David Bowie’s “Let’s Dance” and more. They felt punitive, especially once Mr. Drummey began singing through a talkbox.
*nytimes.com