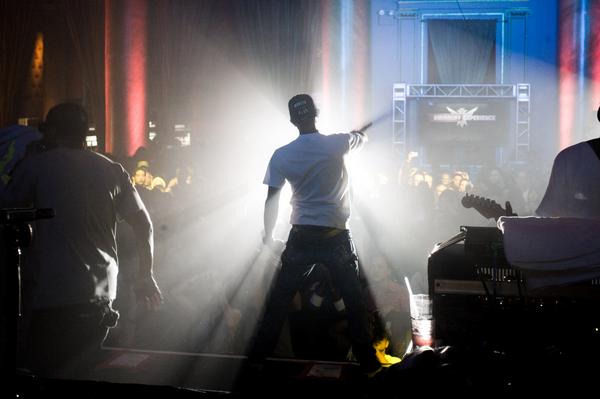 Capitale on New York’s Bowery played host to a truly unique hip-hop show on Tuesday October 7th, as The Smirnoff Experience show hit town with an all-star lineup featuring original collaborations between Nas, N¤E¤R¤D, Spank Rock, Grandmaster Flash, Buckshot, Dizzee Rascal, and a surprise appearance from Kelis. Smirnoff Experience has visited Moscow, Shanghai and Paris this past year, each time putting on unique musical collaborations in stunning venues, with specially designed cocktails and bars. Next stop was New York, which proved no exception: N¤E¤R¤D were joined on stage by Spank Rock, Dizzee Rascal and Nas during the special 90 minute collaborative set which celebrated the past, present and future of hip-hop. Inside Capitale, special bars played tribute to the birth of hip-hop, New York’s nightlife tradition, the cocktail revolution and the original events Smirnoff have been staging over the past year. Special drinks included a basil-flavoured Smirnoff Martini, and The Fourth Element which mixed Smirnoff Black Cherry with a fresh lemonade.

A huge stage had been installed at the venue, behind which were two giant screens and a series of Smirnoff logos floating in the air over the performers’ heads. The event was being filmed for TV and online, with six cameras including a crane that swept over the audience. Grandmaster Flash was the first big name up, with an hour-long DJ set. Buckshot followed appearing for two tracks, before Baltimore’s Devlin and Darko DJ’d for around two hours. The pace stepped up when Spank Rock took the stage in the guise of MC Naeem with special guest Amanda Blank. This being a hip-hop show, naturally N¤E¤R¤D were late taking the stage. Emcee Sway kept the crowd informed as N¤E¤R¤D tried to tear themselves away from catching up with the huge number of hip-hop’s finest who were in the artists’ area upstairs. The band then exploded onto the stage with Rockstar, before Pharrell started working the crowd. 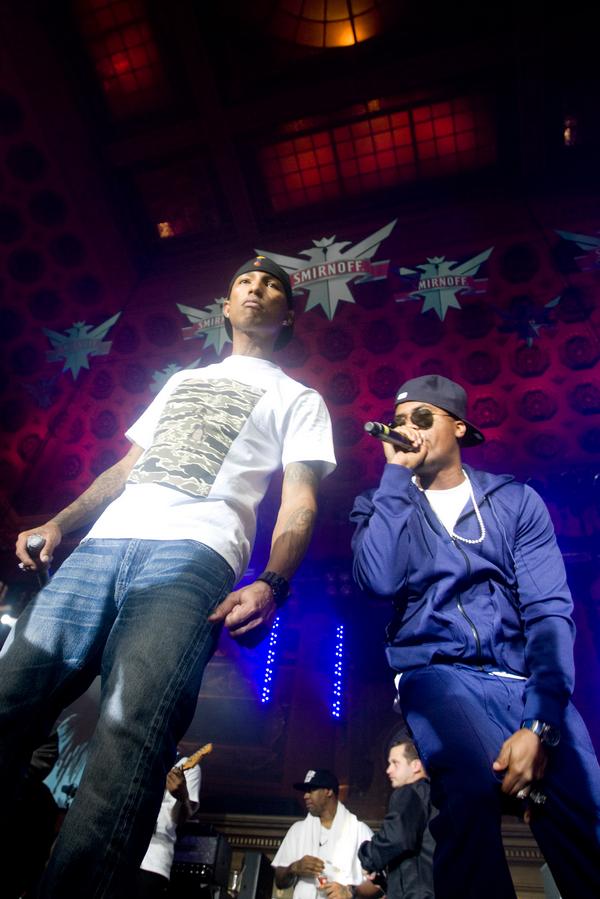 He asked if anyone was following what was happening on Wall Street, before dedicating the next song to all those who work in finance and singing “Sooner Or Later it all comes crashing down” from the track ‘Sooner Or Later’ on their recent album ‘Seeing Sounds’. Halfway through ‘Lapdance’ the uniquely original collaborations started to unfold, UK hip-hop star and recent #1 artist Dizzee Rascal took to the stage, singing the third verse of the song before being joined by Pharrell on the chorus. Next up was Spank Rock with Naeem joining the band to perform. The biggest moment of the night, however, came at the end of N¤E¤R¤D’s set when the band played along with Green Lantern as Nas, supported by Pharrell and Chad, performed Nas’ classic track ‘Made You Look’. If that was the icing on the cake, what came next was truly the cherry on top as Nas was joined by his wife Kelis in a very public quashing of recent rumours about their marriage for a performance of ‘If I Ruled the World’. By this point the show had over run, but the crowd was still packed in and calling for more.