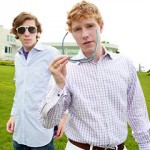 Major League Soccer announced today that recording artists Chester French and Colby O’Donis will perform live at MLS Cup 2008. Major League Soccer’s 13th annual championship game features the Eastern Conference Champions taking on the Western Conference Champions at the Home Depot Center in Carson, Calif. The match will be broadcast live on ABC, TeleFutura and CBC on Sunday, Nov. 23 at 3:30 ET. “Major League Soccer is delighted in welcoming Chester French and Colby O’Donis to highlight our pregame festivities at the 13th annual MLS Cup championship match,” said Geoffrey Hayes MLS vice president of special events. “We are excited that an innovative, up-and-coming musical lineup will be on hand to provide our fans the entertainment that they have come to expect from our marquee events.”Chester French will headline the pregame festivities with a live performance of songs from their album.