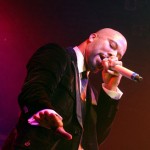 “Check me out on the website ThinkCommon.com, y’all can get the whole album for 99 cents the day the album is released, y’all can’t beat that, my music is priceless. [Laughs]”. Common was recently speaking in North Carolina, where he caught up with HipHopDX. There, the Chicago veteran emcee talked about his forthcoming album Universal Mind Control. “I’m really excited about it and for me as long as I’ve been making music I always wanted to challenge myself. This album is a lot of free music, a lot of feel good music. I didn’t overthink the subject matters and made music you can dance too, ride out too, and have fun too. I wanted to give people something to smile about, enjoy, and let loose.” Within Universal Mind Control, Common says he has a song that really embodies the political climate America witnessed earlier this month in his home city. “I have a song called ‘Changes’ and it’s a reflection of what I see in the future, it’s changes going on right now.

The youth really have a opportunity due to the fact we have Barack Obama in office. It’s due to the fact that people of all colors can see a black men, with his black women, and family can really do something powerful and lead this country. I wrote it probably five or six months ago, and it really fitting for the climate of the world right now.” Lastly, as artists ranging from Mos Def and 50 Cent have traded fourth quarter releases for a much less crowded 2009, Common explained his own push-back. “I originally was starting this album as an EP which was like a six song collection of songs. It was called Invincible Summer and I wanted to bring it out during the summertime. I did this film Terminator Salvation and I couldn’t finish the album in period I wanted to. I said, ‘Man Universal Mind Control is the perfect title for the sound of the music. UMC fits the theme of what the album is about. That sounds like something from back in the days to something futuristic.
*hiphopdx.com