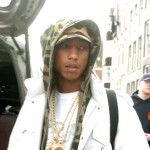 From the hyped Lil’ Wayne and Juelz Santana connection, to the super group consisting of Kanye West, Pharrell Williams and Lupe Fiasco, hip-hop is full of potential collabo projects that never materialize. A few weeks ago, Nelly revealed his plans to form a super group with T-Pain, Akon and Pharrell. Kon, confirmed that the project is a possibility. “It’s definitely something that we’re discussing,”. “An idea is always an idea. Whether or not it manifests is really on the powers of those with the idea.” “I’m all for it,” he continued. “I love to make more money. I love to create new music with artists that I admire so it’s definitely something I would be with if they could get it together.”

Unfortunately for Akon, the odds are stacked against a disc from a hip-hop based “super group.” T-Pain’s heavily hyped T-Wayne project with Lil’ Wayne has yet to come to fruition and Pharrell is already committed to a super group called Child Rebel Soldiers with Kanye West and Lupe Fiasco. Though Fiasco said he and his fellow CRS rappers have recorded a bunch of records for the forthcoming LP he also admitted that getting superstars to come together is not an easy task. “First he don’t wanna do no verse on this one, then he don’t like this beat. Then he can’t come to the studio on time,” Fiasco said. “It’s regular group action going on but amazing records.”