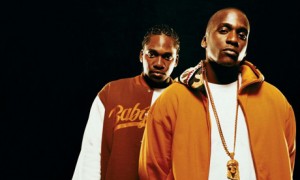 It’s always a special occasion when the Clipse drop a mixtape — you know you’re going to get a ton of quotables. This time around, though, it really is just the Clipse: Malice and baby bro Pusha T. Unlike the We Got It 4 Cheap series, Re-Up Gang don’t appear on this one, for the most part. “He’s on one or two [tracks],” Pusha said of Ab-Liva’s contribution — Sandman bolted a few months back. “There is still a Re-Up Gang and a Re-Up Records,” he explained. Clipse are dropping the Road To Till the Casket Drops Mixtape in a couple of weeks as a prelude to their album Till The Casket Drops. “The mixtape itself is serious business, lyric-driven,” Pusha described. “The energy is there. The energy alone, it’s gonna show you the space that the Clipse are in. I feel good right now.”  The guys released the mixtape’s intro last week, and the full thing should be out right after the Thanksgiving holiday. “We did the ‘Art of Story Telling [Part 4],’ ” Push divulged. “I love that record. [It] was a task because I think that [Andre 3000] bodied it. Yeah. He bodied it so well that it was tough. I think we did well. Game’s ‘Big Dreams’ was another beat we used. That record was wild. I think we did our thing on there. We did R&B, dawg. We did ‘So Fly’ and ‘Addiction.’

The whole process was like picking good records that we heard that were amazing to us. Good music is few and far between these days. Oh, we did Lupe’s ‘Dumb It Down’ beat, too. We did a few joints.” Push is hoping the official album comes out on March 10 (one day after the 12th anniversary of the death of his favorite MC, Notorious B.I.G.), but says Sony is looking more towards the beginning of April for the drop date. “It’s like weathering a storm, coming out of it,” Push said, talking about his new record deal. “It’s a new start, it’s fresh. You’re around creative people, people like hip-hop executives who understand music. Good vibes around everything. Everybody wants to see us win and [they’re] willing to entertain trying a multitude of things to make it happen.” One move was getting Kanye West to cameo on the LP. “The album is coming along good,” Push said. “We got Kanye West on it, rapping. I’m scheduled to get with him and get some music as well. We sort of brought him into our world a little bit and he got off. He’s definitely on his rap/hip-hop mode and bodying you with those lines and the quirky cleverness Kanye hits you with. He’s the pop-culture king — when it comes to rapping about today and incorporating popular life into verses, he’s the greatest.”