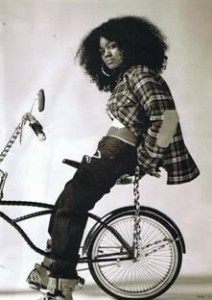 For someone who touts Google so much, you’d figure Teyana Taylor would be hip enough to know that footage of her dancing in a leotard was bound to make it onto the Internet. Think again. The burgeoning artist recently mimicked Beyoncé’s “Single Ladies (Put A Ring On It)” dance routine, and the video popped up all over the blogosphere. “Oh my God, everybody has seen that!” Taylor told MTV News. “I didn’t know it was gonna be like that. Everybody’s been like, ‘I seen you in the leotard.’ It’s crazy, because I just learned it that morning, ’cause it was just for fun. It was at the National Black Theater on 125th [Street in Harlem, New York]. My homegirl had a fashion show, and I hosted it for her. I told her I would do it for fun. Being that I was the host, I feel like I had to go all the way.”Taylor fashioned her hosting duties after former BET Awards host Mo’Nique. The plus-size comedienne entered the 2007 show with a full throng of dancers performing Beyoncé’s “Déjà Vu.” In 2004, Mo playfully mimicked the singer’s “Crazy In Love” routine. It’s a good thing Taylor’s been working on her moves. The Pharrell protégé is set to release her newest single, “I Feel Alive.” The track will be the second selection from her forthcoming debut, From A Planet Called Harlem. Taylor said the uptempo track will “definitely show off more of my dancing qualities.” The album is tentatively due in late April on Star Trak/ Interscope Records. For From A Planet Called Harlem, Taylor has worked with Pharrell (“Kisser“) and Eve on a track called “Young Girl.” Another collaborator she’s working with is Lil’ Wayne. Despite all of Wayne’s bravado, Taylor said she’s not wary of working with him. In fact, she said her friendship with the Cash Money lyricist makes it easy, while it was Eve’s contribution that made her nervous. “That’s my boy,” she said of Wayne. “I’m cool with everybody I work with. I’m a social butterfly. I make friends with everybody. So nothing really intimidates me. But when you’re cool with someone, it’s more like, ‘Oh, that’s my boy.’ If I didn’t know him, yeah, I’d be [intimidated]. “When Eve got on my ‘Young Girl’ song, I didn’t know her,” Taylor continued. “And when I heard it, I was smiling mad hard. I couldn’t stop smiling. Just, oh my God, I can’t believe I got her on my song.”