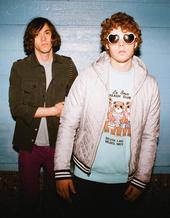 According to Chester French, their tune Dance won’t be on “Love The Future, here is what they said on their Myspace site. “So some of you guys might’ve seen that a song of ours called ‘Dance’ started hitting the blogs and all else a week or so ago. We’re glad you guys are loving the song. But we have to clear this up… It’s not a leaked track from ‘Love The Future’ (our debut LP,coming out this year). It’s actually one of the cuts off of our independently released EP “Chester French’s First Love”, which we recorded and released FIVE years ago! Back when we were a five piece, not a duo. So it’s crazy/awesome/funny/wild that it’s making the rounds right now. And one of our absolute favorite radio stations, Milwaukee’s 88nine, is featuring the track on their website’s reoccuring segment, ‘Are You Feeling This”. Go & Vote For Chester Now!