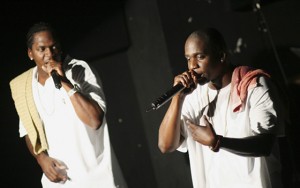 The Clipse came back with a lyrical snow flurry recently on the mixtape Play Cloths Presents: Road To Till The Casket Drops. The brothers actually killed two birds with one stone, promoting their new clothing line (the Obama inauguration tees are dope) as well as pumping out energy in anticipation of their third LP, Till The Casket Drops. “We’re all consumed with the album,” Pusha T. told us via cell from Canada late last week. “It’s very close to being done. We’re just trying to piece these little pieces together. It’s the last 20 percent. I’m loving it. I’m feeling this is the make-or-break album for the Clipse. This is the album that’s gonna define us as far as showing we can stretch in both worlds as far as the underground and as far as the mainstream.” Two Sony Music executives who were instrumental in bringing the duo’s Re-Up Gang imprint over to the record company — Al Branch and Kyambo “Hip Hop” Joshua — were recently let go. Pusha said the label’s reshuffling shouldn’t hurt their project.

“It’s not gonna affect us. We’re too far done with the album,” Push explained. “The thing about us, it was never lack of music. Our problems have been an executing and marketing issue. I think we got a pretty good stronghold on it. I heard about the Hip Hop and Al Branch situation. I’m sure all of that is going to work itself out in our favor.” The remaining production on Till The Casket Drops is being kept under wraps, but the bulk of the album is pretty evenly distributed thus far. “I got a few from the Neptunes. I think the Neptunes have maybe four, three, somewhere in there. I got a few from [DJ] Khalil,” Push revealed. “Got a couple from Sean C. & LV. One from Swizz Beatz. Nottz! I got one from Nottz. The next few I don’t really wanna say, but I got a few more people committed to lacing this tail end of it.” We’ll hear the first single around February 1. “We have the record. It’s getting mixed,” Pusha said. “It’s already ready. That cake is baked. It’s called ‘Kinda Like a Big Deal.’ It’s about being kinda like a big deal. The collabo on there, the record in general, it’s kinda like a big deal.” When asked if the collaboration in question is with Kanye West, Pusha got tight-lipped: “Hey, man, it’s just one of them joints.”