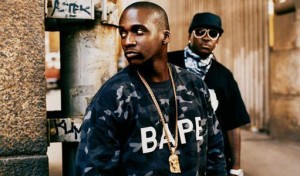 It’s probably wrong to call a million-selling duo a cult act, but in its uncompromising grimness and intricate wordplay, Virginia’s Clipse is the sort of group that elicits hard-core devotion, or none at all. Since emerging to a national rap audience with 2002’s Lord Willin’, brothers Malice and Pusha T.—known to their mom as Gene and Terrence Thornton—have established the gold standard in coke-rap, portraying the drug pusher’s lifestyle in remarkably vivid detail, their careful, even tones suggesting a sad resignation at the sorry state of inner-city life. On record, the Thorntons refuse to play the flashy kingpins. Their stories are too rich in detail, too steeped in the practicalities of the drug trade and its consequences, to be considered mere acts of glorification. Even at their most triumphant, there’s a nagging sense of self-reproach at play in the siblings’ voices, a paradox that gives their songs an insistent, addictive humanity.

No matter how vivid the lyrics, Clipse has yet to develop the kind of signature personality trait that’s required of rappers who want to be pop stars. Of the few MCs who can match the brothers’ inventive wordplay, their closest rival might be Lil’ Wayne, who borrowed Clipse’s knotted poetic sensibility and pushed it to an absurdist extreme. The similarities in their lyrical styles—and in their fashion sense—gave rise to a short-lived feud between the artists, one that Malice insists was never as big a deal as it may have appeared on the Internet. “It’s unfortunate that we entangled the way we did,” says the rapper, reached at his home in Chesapeake, Virginia. “Before he started talking about us, we never spoke out against him. I’m not in this game to have a problem with anybody. If anybody has anything to say about the Clipse, then of course I’m going to respond. But no one is going to fool me into thinking I have a problem with Lil’ Wayne.”

Wayne’s current chart success heralds a return to the kind of literate hip-hop that Clipse so valiantly upholds. Freed of a terrible arrangement with Jive Records, the duo recently signed with Columbia, lured in part by the executive presence of Rick Rubin, who may contribute a track or two to the pair’s forthcoming album, Till The Casket Drops. After working exclusively with the Neptunes on Lord Willin’ and 2006’s Hell Hath No Fury, the Thorntons are soliciting beats from hit-makers (like Swizz Beatz) and unknowns alike. “We were spoiled to have cats like the Neptunes who are just so dead on-point with everything they do,” he says. “Having grown up together, they pretty much know us inside and out. Now the beat-picking process has become a little more tedious. Everybody wants to live up to what the Neptunes did with us. Everybody wants to fill those shoes.”

Long the victims of major-label neglect, the Thornton brothers see their third album as a rebirth of sorts, a chance to engage a public that can’t but have grown bored with the status quo. Without wishing to sound too grandiose about it, Malice takes the election of Barack Obama as a necessarily regenerative event—not just politically, but culturally. “At a time when we are, as Americans, at our lowest, when we’re dealing with hardships and struggle and suffering, it makes sense to me that a black man was elected president,” he says. “Because who knows more about strife and struggle than black people? When I first heard Obama was running, I thought, ‘Good for you, but you’re not getting nowhere.’ But to see him elected, it’s definitely a sign of hope and a sign of new ways of thinking.”