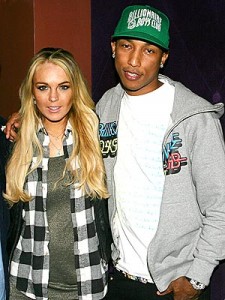 Pharrell has offered to help revive Lindsay Lohan’s music career by producing her next album. The actress admitted in November (08′) she isn’t quite ready to head back into the studio to record her third album for her record label Motown. But the hip-hop producer has tried to tempt her into making her musical comeback – by offering to take charge of the project. Lohan tells Interview magazine, “He’s (Pharrell Williams) an amazing guy. He’s only been really kind to me whenever I’ve met him. He said, ‘I’d love to make a great record with you, but I want to take you out of all the elements that you’re used to. Let’s go away. Let’s go somewhere nice where you can be focused, and let’s make an album there.’ “I really respected that because not only is it hard for someone to just say something like that, it’s nice that, as much as I admire him, he would even take the time to say that to me. But it’s true. That’s what it takes.”