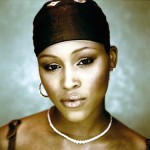 It was close to two years ago when rapper Eve released her single “Tambourine” from the album Here I Am. Although the single was released, Here I Am never was, and instead was shelved for almost two years. Now the Philadelphia-born rapper will finally have the opportunity to release a fourth album, but under a new name and label. Currently entitled Flirt, Eve’s upcoming album will be released on Geffen Records. Due to the delay, Flirt will feature a number of re-recorded tracks from Here I Am. “Unfortunately I am caught up in a whole music label situation,” Eve told the New York Post. “The album is finally going to come out this spring or summer. . “I think what kind of delayed us this time was that I went in and did two records that sound a lot like the Pharrell record – the singing record,” Eve explained about the cancellation back in October 2007. But with all the time that passed, we went back in and reworked the whole thing. I am truly, truly sitting on some amazing music. Nobody’s been waiting longer than me to get this monkey off my back!” As far as the name change is concerned, the change was a reflection of Eve’s new state of mind. “I had to get in there and put in some upbeat music that I wasn’t depressed about…It won’t be called ‘Here I Am’ anymore,” Eve explained to the Post.