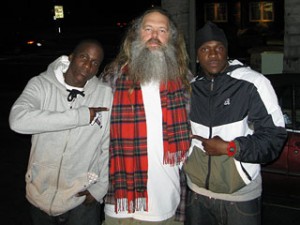 Legendary producer Rick Rubin has been working on tracks for the Clipse’s long-awaited third album this month, the rap duo’s camp tells EW. Rubin, who signed the Clipse to Columbia Records shortly after taking over as the label’s cochairman in 2007, has completed one tune with them so far in a Malibu studio; they plan to work with him on one to two more in the coming weeks. Though Rubin began his career in the ’80s working with acts like Run-D.M.C., LL Cool J, and the Beastie Boys, he’s more recently focused on producing rock and pop bands like Red Hot Chili Peppers and Weezer — along with occasional high-profile forays into hip-hop like Jay-Z’s “99 Problems” in 2003. Needless to say, the thought of the bearded studio wizard crafting tracks for critical darlings the Clipse is enough to make many rap fans salivate. The Clipse is currently aiming for a late-summer release for Til The Casket Drops, which will feature contributions from a wide range of beatsmiths. First single “Kinda Like A Big Deal,” produced by DJ Khalil and featuring Kanye West, is set to drop March 9.