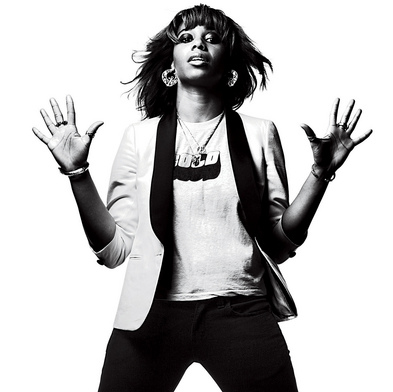 The rapper/singer/songwriter now known as Santigold isn’t letting a little ol’ “o” get in her way. Despite being forced to change her moniker, Santigold has been busy in the studio, making guest appearances on new albums from the Beastie Boys and David Byrne while recently recording new tracks with Pharrell, according to Billboard’s sources.  She’s also getting ready for a spring headlining tour, her first with a full band. In February, she announced the change of her longtime nom de plume from Santogold with an ambiguous announcement: “Change the graffiti on the bathroom wall, get your tattoo fixed, get your t-shirt airbrushed and change the name on your year end list… She’s not telling you why, that’s just how it is. No unpronounceable symbol, no numbers where they shouldn’t be, no random capitalization, just plain ass Santigold so remember that.”

Unacknowledged in the statement was the pending lawsuit from a certain Santo Gold, a jeweller, part-time film director and 1980s infomercial staple. The Baltimore-based Santo Gold recently announced plans for his own record, entitled “I Am The Real Santo Gold.” No matter, the newly dubbed Santigold is busier than ever.  She recently played a free gig at the US Open Snowboarding Championships in Vermont and helped kick off Jimmy Fallon’s new gig on “Late Night.” For the spring tour, she’s bringing Downtown Records label mate Amanda Blank and Trouble Andrew, who can be heard on the Santigold track “I’m A Lady,” as openers. Santigold will appear at the Sasquatch Festival in Washington, the Bonnaroo festival in Tennessee and the Roots Picnic in Philadelphia.