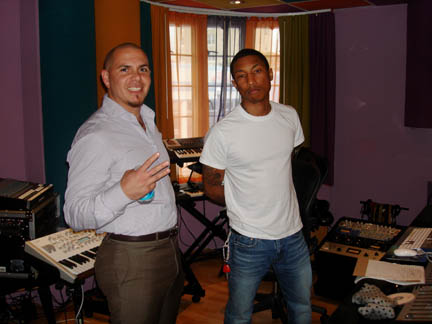 Remember the pics we’ve seen off Pitbull & The Neptunes in the studio… well, that session was for the Fast & Furious OST where they been working on the „Blanco“ track. So far there are 2 neptunes tracks on the Fast & Furious 4 OST, „Pitbull – Blanco feat. Pharrell“ & „Tego Calderon – You Slip, She Grip feat. Pitbull“ although that tune has to be confirmed yet because that doesn’t really sound as a Neptunes track but Pitbull is shouting out Skateboard P on the track, so we’ll see later on if it’s a Neptunes production. There is also a 3rd neptunes track by Fam-Lay that is on the Fast & Furious 4 OST but we don’t know yet if ist a old or new tune.

Fam-Lay On The Fast & Furious 4 Movie