On bikes, skateboarding and everything in between. Pharrell Williams is a man of many faces. There’s Pharrell the producer, who as one half of The Neptunes has churned out hits for everyone from Britney to The Hives. There’s Pharrell the frontman and drummer behind hip-hop-rock hybrid band NERD. There’s also Pharrell the fashion mogul, co-founder of clothing label Billionaire Boys Club and Ice Cream footwear, who has everyone from Louis Vuitton to designer furniture makers Domeau & Pérès knocking down his door to collaborate. And then there’s Pharrell the business tycoon, creaming off a nice earner from his record label, Star Trak. But, somewhere in between all this, there’s still ‘Skateboard P’ – the kid who grew up, made a buck or two and fulfilled a childhood dream by building a half pipe in his house. 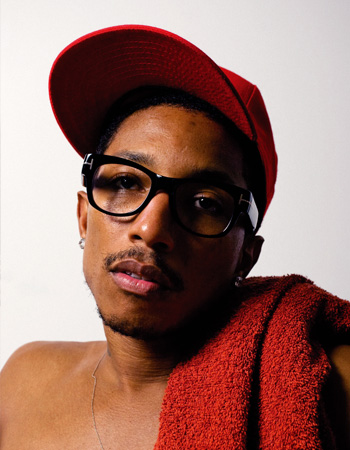 The Pharrell here today is of the sweaty, topless, post-gig kind. And, before music or skateboarding, we’re here to talk bikes. Well, one bike in particular – a 26” Dirt Jumper from Brooklyn Machine Works that takes its name from Pharrell’s bodyguard, Big Ben. So is there any link between the giant towering over Pharrell and London’s famous clock? “No, it’s because I’m fucking big and called Ben.” One beefy bodyguard suitably pissed off, all that stands between us and Pharrell is the star-struck teen who, in between excited yelps of adoration, has snuck backstage to throw a phone into her hero’s face and squeal, “Say hi to my sister!” Exuding the patience of a much-admired man, Pharrell questions his admirer’s age before responding with a responsible, “This is Pharrell you’re talking to – not Gary Glitter.” Excitable underage distractions sidelined, gold-plated blackberry switched off, Pharrell Williams – a man with fingers in all pies – is finally ready to talk.

HUCK: Okay, let’s start at the beginning. Skateboarding, bikes and music are clearly all a big part of your life – but how about when you were growing up?
PHARRELL WILLIAMS: Well, yeah, that’s all we did as kids – skate or ride our bikes. I mean, I wasn’t really good on a bike, we used to go on dirt trails and just do crazy jumps and shit. It was like a group of ten of us, back when it was all about Diamond Backs and Haros and Hutches. You know, when you’re a kid, it’s just kinda like… it’s very broad – you’re not all about skating, or all about being on a bike. I dunno, we were just well-rounded kids.

H: You’ve watched hip hop and skateboarding move away from their underground roots and into mainstream culture. Do you see this as a good or bad thing?
P: I think it’s a beautiful thing because it allows for more people to get into it and for it to gain the respect it deserves. You know, if skating hadn’t gained its popularity there would be no X Games – there wouldn’t be the Shecklers of this world or the P-Rods. Those guys make the money that they do because these huge corporations realise that kids watch those guys, and they’re very talented so it makes sense. It’s cool when it’s underground but it has to grow in order to mature and gain the respect of the world that will support it and endorse it.

H: Some people may credit you with helping to bring hip hop to a wider audience. Was that a big motivation when it came to producing – were you always looking to open your sound up to as many people as possible?
P: For me, everything just sort of happened like that by accident. I wasn’t looking for anything to grow or be much bigger. I was just happy to be a part of it.

H: So it wasn’t an intentional thing, to bring that sound to a broader market?
P: Who am I to say, ‘Oh yeah, I’m gonna bring it?’ Who the fuck am I? Even if I wanted to show it to people, who knew that I had the power to do it, is what I’m saying. Like, who am I to assume that I’m gonna be able to bring it to the forefront? I don’t have that power, you know. So, like I said, if I had anything to say, it’s that I’m very happy to be a part of it and to be instrumental in it, but not necessarily the key catalyst. If anything I’m just riding on the coattails of people who really do it and are really great. Call it my adoration and appreciation for people who are ill and are sick with it.

H: You do seem to put out a lot of stuff that’s part of collaborations. Is that important to you – to be part of a team?
P: It’s not a necessity – it’s a pleasure and a privilege to be able to collaborate with different talented people, you know. Like I just did a song [for shoe company Converse] with Santigold and Julian Casablancas from The Strokes. How can you do that? Those are two super talented individuals.

H: You’ve collaborated with everyone from Madonna to Daft Punk. Is there anyone out there that you’d still love to work with?
P: At this point, probably someone like Prince. But it would be nice to do some records on The Strokes’ new album.

H: Changing the subject slightly, I hear you have a half pipe in your house…?
P: Yes sir…

H: Bringing your love for skate and music back together, do you think you can compare the feeling you get from pulling a really good trick to producing a really good track? Do they both give you the same sort of buzz?
P: I’ve never looked at it like that, but I guess it’s true. The funny thing is that you picked two hobbies that are user oriented. I can’t tell you what the high is that somebody gets when they catch some serious air or what some other musician feels when he plays something great. I love music, but it’s not about me – it’s about the audience and how they feel. That’s what I get a high from. I get high off of seeing them like something.

H: Is that part of the reason why you started NERD, to move away from producing behind the scenes and get out there in front of your fans?
P: I dunno, I guess NERD is more like an ID for us. NERD is who we are and The Neptunes is what we do as producers. NERD is our explanation for why we think the way we think and the way we see things. Thanks To Huck.huckmagazine.com