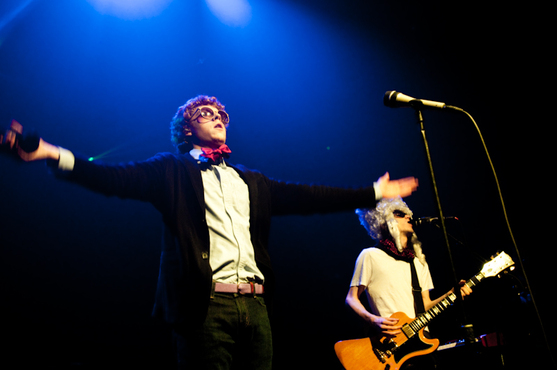 Last month, Harvard-grads-turned-rock-stars Chester French released their premiere album, “Love The Future.” They also made a few “colorful” additions to their online store. Alongside records, t-shirts, and stickers, dedicated fans can now purchase the “ENDURANCE Package,” which includes a work-out session with band members D.A. Wallach and Maxwell C. Drummey ’07 and a game of two-on-two basketball. The “Slumber Party Package” (you provide the sleeping bags and cartoon-themed pillowcases) features breakfast for the family prepared by the band, as well as a serenade of your mother on the ukulele. The “African Safari Package,” costs $75,000. FM interviewed the dynamic duo on their innovative marketing scheme, their new album, and their life as rock stars.

1. Fifteen Minutes: What was the inspiration behind your newest additions to the online store?
D.A. Wallach: We thought it would be cool if our supporters could buy stuff directly from us. On the bottom end we’re offering something comparable to iTunes, our digital iTunes. We wanted to give people as many options as possible…We wanted to give stickers, t-shirts, records. Put down 20 bucks on a record and you actually get some cool stuff with it.

2. FM: How about the more unconventional packages?
D.A.: Fortunately we’ve had a lot of interest in these packages. In addition to making money, we’re also starting a movement. We’re gonna fight childhood and adult obesity, with one endurance event at a time. And since there are two of us we might be able to do two endurance events at a time some day.

3. FM: So are you looking at cardiovascular health here?
Max Drummey: We’re doing Jane Fonda. Shit, dude. A combination between Jane Fonda and Ron Jeremy. We can last however long we need to last. And also, body hair—we’re somewhere in between the two of them.
D.A.: When people look at the endurance package, they’re not just looking at cardio strength, they’re going to gain mental fortitude, have higher self-esteem. It’s really like a holistic approach to wellness.

4. FM: Any takers yet?
D.A.: We’ve done a lot of e-mails. Unfortunately because we’re off tour right now we can’t start them right away, cause we’d be committing to doing it in the person’s city. What we do is we have a map and we look: right now there’s a person in Hartford that wants to do our endurance package. Once we put the tour together, we contact the person and say, “Hey we’re coming to your city, are you still interested? If you’re not a coward you better still be interested cause we’re going to work you out. We’ll show you what time it is.”

5. FM: Which cartoon characters appear on your cartoon-themed pillowcases?
Max: Wet dream come true? (And to be honest I don’t have a lot of wet dreams ’cause like, I have a lot of privacy in my bunk, and I can make it happen whenever.) But I’d like a Thundercats pillowcase.
D.A.: Dude, I’d say Mighty Mouse would be pretty dope. Yeah.

6. FM: Which African Safari animal most embodies Chester French?
Max: The elephant. Hands down. No more stupid questions, dude. Just figure it out yourself. The elephant. Dumb fuck.
D.A.: The Cheetah too
Max: D.A. don’t be ignorant
D.A.: Whatever
Max: I saw an elephant once in D.C., it was pretty disgusting.
D.A.: Elephants have huge wangs. They’re really inspiring.
Max: Yeah.

7. FM: So you mention in the package description that you will play a game of two-on-two basketball with your clients—
Max: Not our clients – that implies more of a business relationship. Endurance is really more of a spiritual and emotional thing. We’re trying to come up with a word – comrade and brother are sorta taken. We’re into neologism and we’re gonna invent a word to use. We might say “jacque jammer”.
D.A.: Or even just a “jacque”
Max: Even just a Cousteau.
D.A.: Yeah.

8. FM: So who would win in a game of two-on-two: your producers Pharrell and Chad Hugo—Founders of Star Trak—or Chester French?
D.A.: They’d win because Pharrell’s black, and everyone knows black people are way way way better at basketball.
Max: And what people don’t realize about Pharrell is that in addition to having massive, powerful, yet soft and beautiful hands, he’s like 6’3”, dude. I saw this mother fucker like no joke, do a two hand reverse dunk with two running steps. I’m not even shitting you. I might be shitting myself right now, but I’m not shitting you.

9. FM: Who would win in a game of one-on-one: D.A. or Max?
Max: One thing I learned, ’cause I used to play with a lot of retarded kids, is the best way to resolve any game is to play to a tie – that way everybody’s happy. Retard or not, down, whatever, people got feelings. So you gotta play to a tie. Unless there’s a black guy like Pharrell, then he’s totally gonna smash you.
D.A.: Every time.

10. FM: By the way, you guys know this is running in FM, right?
Max: Oh great, yeah yeah, FM has lower standards, you can print whatever the fuck you want.
D.A.: You know a couple years ago I was writing a column for FM. Yeah, go check it out. It ran every week; it’s called the “Bell Lap.”

11. FM: What has been the greatest change in your life since becoming jet-setting rock stars?
Max: I tried this product called “Extends.” I’ve been getting a lot of e-mails about it. It’s all-natural male enhancement. It’s been the greatest change…in my life. Shit is way bigger now. I’ve grown comfortable taking it out in most situations and retail environments, which before I was a little timid about.
D.A.: I don’t know, I mean we live on a bus now, which is a fairly extreme lifestyle switch. But other than that I mean, we live in our mom’s houses. In the cities we grew up in. We still don’t know how to cook very well. Yeah. Oh also, we now have millions of dollars. Just joking—we don’t.
Max: I’m in debt, actually.

12. FM: How has the response been to “Love The Future”?:
Max: Great—people bought it and told us it was good.
D.A.: The Boston Globe gave it an amazing review, just like the Associated Press. People Magazine gave it 3.5/4 stars, and without any radio play we’re the number 3 top album on iTunes, and the number 12 album on iTunes this morning overall. So it’s been great. Just the past year—touring or whatever—we’ve got a lot of people who actually support us, who aren’t just following a trend. You always worry that people might not like it. We put out a pre-album a week ago, called “Jacques Jams Volume One: Endurance.” And that’s a free album. So now we tell people you can go and get a whole album for free, and if you like it please buy the real one. I’ve never seen an artist do that before.
Max: You can give us $8, and you can get two albums. That’s literally 100 minutes of music.

13. FM: How is being a rock star like being a Harvard student?
Max: It’s not like being a Harvard student at all.
D.A.: You’re not in college
Max: You’re not in class, don’t go to dining hall.
D.A.: You do hang out with a lot of rich people.
Max: A lot of arrogant rich pricks. Who are actually stupider than they think they are. A lot of people who only care about money too.

14. FM: You produced much of “Love The Future” while at Harvard. How large of a role did Star Trak play in producing the final product?
Max: One thing that was really exciting and appealing was that from the first time we met them, they were happy to let us do whatever we want. That’s what they prefer, and what we prefer. We have sought their advice, and usually what happens [is] they don’t tell us what to do, just make us feel comfortable making our own decisions. You know they’re like, “Make your own call, this is your album, get it done.” They’ve been enormously helpful, and super inspiring to us throughout our whole lives. And it’s been exciting getting to watch them in the studio and collaborate with them a few times.
D.A.: Working out with these kids is 21st century alchemy. We’re living the miser’s dream right now
Max: The miser’s wet dream
D.A.: Super wet. It’s like going everywhere.