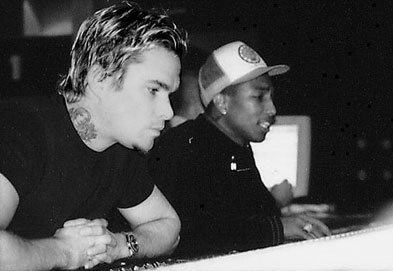 Remember this  picture off Sugar Ray with The Neptunes in the studio back in 2003 , well if y’all been wondering what happened with that collaboration her is an explanation of Sugar Ray’s frontman Mark McGrath.

“Back in 2003, the writing was on the wall for bands like us,” frontman Mark McGrath says. “Radio was changing, music was doing what it does, it was just going through a cycle. We weren’t selling a lot of records and we were like ‘You know, maybe we should take a break from the grind of recording and touring and see what else is out there. We tried to get away from the Sugar Ray sound on our last record — we even worked with The Neptunes on a couple of songs — trying to reinvent ourselves but it didn’t really work for us,” McGrath admits. “But now we’re like ‘Let’s give them a straight down the center, summer, sunny Sugar Ray song’ and I think ‘Boardwalk’ really embodies that. From the title ‘Boardwalk’ to the sound of the song, the harmony, the acoustic guitar, the lyrical content — you’re going to hear the song and go ‘Wow, that’s Sugar Ray for sure.'”

Sugar Ray will release its first full album of new material in more than six years with Music For Cougars on July 21st. The band has already scheduled supporting tour dates for the summer. Check them out below. Their new label, Pulse, suggested recently they take a little money and just make a fun album.