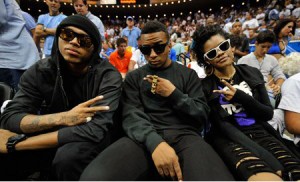 A week before Rihanna is set to take the stand against him in his preliminary hearing for the alleged assault on her, Chris Brown thought it was a good idea to play some jokes on Rihanna. Last night Chris showed up at the NBA Finals game (between the L.A. Lakers and the Orlando Magic) with two friends, one was dressed up like Rihanna. Teyana Taylor, a singer and friend of Chris Brown, dressed up like Rihanna, who she apparently used to be friends with. Taylor, a protege singer with Pharrell, wrote on her Twitter “”omgggggg if one more reporter say that im rihanna im gonna go crazzzzzzzzyyyyyyyyyyyyyyyyyyyy … I wish the AP would do a little research. since wen am i RIhanna … yahoo and everybody else just did a biggg f***in s**t””