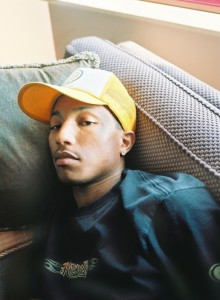 Pharrell is being sued by the band Greggy Tah. In a new federal lawsuit that was filed this week, Thomas Jordan claims that The Neptunes producer produced track “All I Wanna Do (Feel Like Me),” used by the rap group The Clipse, rips off his “Whoever You Are” song from 1996. The lawsuit says that Pharrell actually produced the 2007 track back in 1997. Check the Greggy Tah tune out, it definitely sounds the same though.