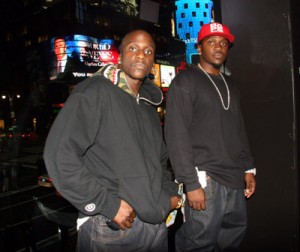 After dropping two critically acclaimed album, The Clipse are prepping the release of their latest offering Till The Casket Drops. This album will take a more positive turn than their last, according to the duo who recently spoke with Karmaloop.com about the new album and a new book penned by group member Malice. “We make our albums off of moods,” Pusha T said. “I would have to say that this album is more of a care-free, up-tempo album paced album more reminiscent of Lord Willin’ than Hell Hath No Fury. That was sort of dark, a bit more angrier. We feel a little bit better on this one.” DJ Khalil, The Neptunes, Cam’Ron and Keri Hilson are said to be featured on the album as musical guests or producers. One person who did not put his work in for this album was Rick Rubin. Though he was rumored to be a part of the creation of the CD, it appears that he didn’t come through for the duo but made up for it with “gems.”

“He lied to us! Rick Rubin lied to us,” Malice joked before Pusha explained. “Nah, Rick Rubin didn’t produce nothing. We went up to Malibu, busted up with him. He gave us a lot of insight on the album. He actually gave us some gems, man. We actually came back and sort of revamped a few things and made the album a little better due to that talk.”Fans can also expect a book from Malice, which he says will be somewhat like his blog entries on MaliceoftheClipse.com. “I also got a book coming out called Wretched, Pitiful, Poor, Blind and Naked,” Malice noted. “It’s along the same line as the blogs. All the blogs are true stories. The book is insane. I get chills when I read it, myself. It’s not your rapper story. It’s not even from rags to riches. It’s just real life and we’ve had a very interesting life.”