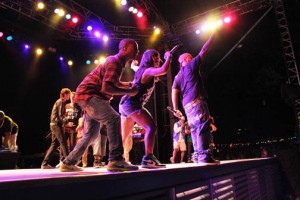 Pharrell Williams nearly missed playing a headline slot at a Copenhagen festival after nattering with Playlist. In a strange twist of musical madness, our Natalie bumped into the NERD frontman at the airport in Geneva, Switzerland, left. So keen was the down-to-earth star, 36, to carry on the chinwag, he had to skip the duty-free shopping and make a mad dash through the airport before his gate closed. The rapper said: “I love playing in the UK but was disappointed about the sound problems we had at Glastonbury. “It’s dope that Playlist came down and checked us out.” Pharrell added that Alesha Dixon was among his top British acts and labelled his star fan Just Jack “cool”.