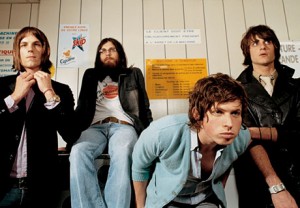 Epic Southern indie rock giants Kings Of Leon have given their permission for a new remix album based on their material. Kings Of Leon have entered a new echelon of fame with their latest album ‘Only By The Night’. A vast, stadium filling affair it may well be the band’s most accomplished effort yet, following on the heels of three acclaimed long players. However fans could be set to hear the material in a very unfamiliar light. In a new interview with Billboard drummer Nathan Followill revealed that the band’s material is set to be remixed by a host of familiar faces. The forthcoming remix album will see Kings Of Leon pulled apart and pieced back together again. In the new interview Followill reveals that the record came about after he heard that Justin Timberlake and Pharrell had remixed some Kings Of Leon songs unofficially.

“It’s neat to have these people who we would’ve jumped at the chance to work with ourselves…coming to us before we even get a chance to ask them,” Followill explained. “It’s amazing to hear your song played by these people who are so creative. Most of the time it takes me two or three listens to even wrap my head around, ‘Oh man, that’s our song’.” Among the names mooted for the new project are Lykke Li and Kenna. The drummer added that Kings Of Leon are set to immortalise their O2 Arena gigs back in July with a new concert film. “We figured what better place to make a live DVD than where the fans have been the craziest for the longest?” he reasoned. Fans hankering for new material may not have long to wait. Nathan Followill told the American entertainment magazine that Kings Of Leon want to be more adventurous. “There’s stuff that sounds like Radiohead. There’s stuff that sounds like Thin Lizzy. There’s stuff that sounds like The Band,” he said. “We’re pretty much to the point now where…we can be experimental and try stuff we would’ve been scared to death to try on the first couple of records.”