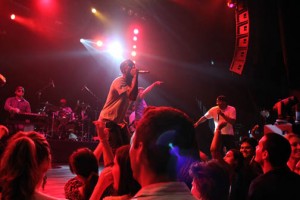 NERD emcee Pharrell performs for a large crowd Saturday evening at the IU Auditorium. The performance by NERD was in conjunction with Welcome Week 2009 events, co-sponsored by the Residence Halls Association and the Union Board. NERD funky beats not only served as entertainment for IU students Saturday night, but as a way to benefit children in need. All proceeds from the Welcome Week performance at the IU Auditorium were donated to the Make-A-Wish Foundation, Caitlyn Kuhs, Union Board Concerts Director, said. The performance was sponsored by the Union Board and the Residence Halls Association. Before the event, senior DeAnthony Scott said he was not only excited to see the group perform, but to support the Make-A-Wish Foundation. “It’s for a good cause,” Scott said. “I expect the concert to be a very hype atmosphere, and everybody will have a good time.”

RHA’S Vice President for Programming Katie Lambert added that the proceeds will help 10 children in the Bloomington area. Before the groups’s performance, DJ 33 1/3 from Chicago opened for NERD and used a projector to mix videos and sound. “We like to get everybody pumped up for the year and excited to be reunited with each other,”  Kuhs said. Freshman Anna Koker came with friends and did not skip a beat while dancing during DJ 33 1/3. “I’m not going to have a voice tomorrow,” she said, and added that she liked the way the DJ blended both old and new music. When NERD’s band finally came on the stage, the crowd erupted into chants of NERD. The group began with the song “Time For Some Action” from the “Seeing Sounds” album, released in June 2008, and proceeded to play other songs from their newest album, including “Kill Joy.” Williams made it clear to the crowd he enjoyed people knowing the band’s music by heart.

“So many of you guys know all of the words to our records,” Williams said. “You don’t know how much that means to us.” He then invited three students on stage. Each had different reactions, including swooning, dancing or singing. During the performance of the band’s first single from the “Seeing Sounds” album called “Everyone Nose (All The Girls Standing In The Line For The Bathroom),” about 30 girls went on stage to dance. For some students, this was an experience never to be replicated. Freshman Sarah Trubshaw had the chance to go on stage with NERD and said it was unreal. “It is amazing how wonderful the musicians are and how good the crowd interaction was,” Trubshaw said. “I sang with Pharrell.”