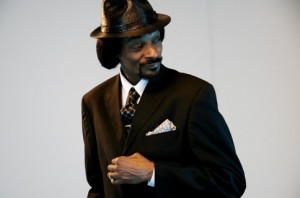 Rapper Snoop Dogg who was announced to be releasing his upcoming album ‘Malice In Wonderland’ in conjunction with MTV in a global deal, as reported on HipHopRX.com, gave a preview of his upcoming album “Malice In Wonderland.” In an interview, Snoop Dogg thanked all the new rappers for inspiring him and bringing him back. “All these young n-ggas in the game, you know, they doing their thang. They inspiring me right now. I’m not a hater. I love it when they go hard…. They brought me back,” stated Snoop Dogg. Snoop Doog goes on to reveal that he worked with Soulja Boy, Jazmine Sullivan, R. Kelly, Dogg Pound, Dr. Dre, Danjahandz, Pharrell Williams and Lalo Shifrin amongst others on the album and it’s scheduled to be released in November and currently hasn’t decided what the first single to be released will be, but instead will let everyone decide for themselves.