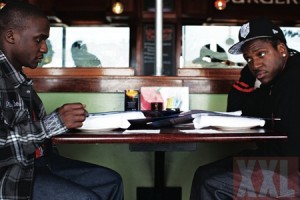 It’s a cool evening in downtown Norfolk, Virginia, and the Clipse have just arrived at MacArthur Center Mall. After a long day filled with photo shoots and driving around town, the sibling duo of Malice and Pusha T cuts into Kincaid’s Fish, Chop & Steakhouse for a few drinks—none of the alcoholic variety. Malice, who’s nursing a migraine, orders a cup of Earl Grey tea with honey and lemon, while younger brother Pusha opts for his favorite Kincaid’s beverage, strawberry lemonade. Their divergent drink selections are representative of the group’s career. Hot and cold. Bittersweet. Over the course of the past 11 years, the Clipse have had the distinct displeasure of calling several labels home. They were originally signed to Elektra Records, in 1998, but got dropped after their debut single, “The Funeral,” failed to catch on commercially.

Four years later, the duo inked a deal with Arista Records, which then got absorbed by Jive Records in 2004. After an extended and public battle with whom Pusha T describes as “them crackas” that weren’t playing fair at Jive, the brothers were finally released to join the Columbia Records roster in 2007. By the time all the label logistics were settled and they had found a new home, the Clipse had released only two official albums. Talent certainly wasn’t the issue. In addition to being praised by hip-hop purists and critics alike for their crisp lyricism, undiluted crack rap and classic mixtapes, Malice and Pusha earned a platinum plaque for their 2002 debut, Lord Willin’, and a classic, XXL rating from this magazine for their 2006 opus, Hell Hath No Fury. Despite the critically acclaimed LPs, the Clipse always seem to find themselves in the midst of label drama, but somehow they’ve managed to keep a positive outlook.

“Anybody else that went through the red tape that we went through, they would of fell out to the wayside,” says Malice, 36. “I say this because I see it and believe it. It’s about having the product. You can’t always control what happens within the label, but if you—and this should serve as a lesson to anybody that does this—if you keep your craft right and do what it is that you’re supposed to do, fans will keep you around. It don’t matter what’s going on. We was gone for four years, and fans was still asking about us, and it’s because we have that integrity with our music every time.” Finally aligned with a label that they can see eye to eye with, the Clipse have spent the past two years crafting their latest offering, Til The Casket Drops.

Set for release this November via their Columbia-distributed Re-Up Gang Records, the album is a potent mix of raw street records (“Kinda Like A Big Deal,” featuring Kanye West), cocksure cuts (“Back by Popular Demand,” featuring Cam’ron), inspirational darts (“Champion”), radio-ready singles (“I’m Good,” featuring Pharrell Williams) and 100 percent reality raps (“Doorman”). “The energy around this album feels more like Lord Willin’ than Hell Hath No Fury,” explains Pusha, 31. “Hell Hath No Fury was a real dark, linear album. [It was] awesome, amazing, classic, but, at the same time, it was really angry… It was just handcuffs on that Hell Hath No Fury album. Lyrically, I think it was a beast. Beats, we feel it was a beast. But it was like it honed into a certain individual. We went directly for the purists’ neck with that album, and we got that, period. But Til The Casket Drops let us expand creatively.” For more of the Me ‘N’ My article, make sure to pick up XXL’s November issue on newsstands now.