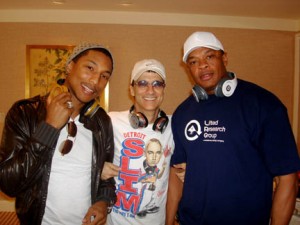 Heralding the arrival of “a new benchmark in sound for the PC,” Interscope Geffen A&M chairman Jimmy Iovine — together with legendary producer Dr. Dre and HP — unveiled the HP ENVY 15 Beats limited edition notebook PC. Launching in the United States on Oct. 22, the newest addition to HP’s flagship ENVY line was revealed during a press conference today (Oct. 9) at Interscope’s Thom Thom Club in Santa Monica, Calif. The HP ENVY 15 Beats is the latest rollout by Beats Electronics LLC, co-founded by Iovine and Dr. Dre in 2006. Featuring a piano black high-gloss finish and the Beats Audio design found in the “Beats by Dr. Dre” headphones line, the HP ENVY 15 Beats will also come bundled with the Dr. Dre headphones and state-of-the-art mixing software from Native Instruments’ Traktor LE. Retailing for $2,299, the HP ENVY 15 Beats will be sold at Best Buy, major retailers and through HP direct.

In addition to Dr. Dre, Iovine noted that several of the industry’s prominent producers — including will.i.am, Kanye West, Pharrell, Timbaland and Polow da Don — helped HP engineers fine-tune the project. “We started this journey with the headphones to improve the transmission of sound between record makers and consumers,” Iovine said during the press conference today. “What’s out there is not representative of what you hear in the recording studio. As we went on this journey, we found that computers were in the way. Artists and producers want their sound repaired in digital audio. Computer companies charge $1,000 for computers but only spend 50 cents for components. With HP, we found a partner willing to take the step to improve the overall sound in the PC. This is for anyone who plays music.”