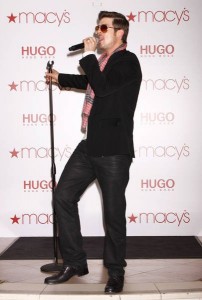 ‘A lot of people are telling me it’s the best album yet, so I’m really excited,’ he says of December 8 release. Alan Thicke beamed into living rooms week after week in the ’80s as therapist Jason Seaver, the patriarch of the sitcom “Growing Pains.” Two decades later, his son Robin is taking up the family business with the release of his latest album, Sex Therapy. “What is the inspiration for Sex Therapy?” Robin asked MTV News on the Los Angeles set of the music video for the album’s single of the same name. “Well, are you stressed out? Overworked? Wound up? Uptight? Sex Therapy is what you need. It’s coming soon — December 8 — courtesy of yours truly, Robin Thicke.”

In addition to curing all those emotional ailments, he promises the album will boast a slew of cool collaborators, including Jay-Z, Snoop Dogg, Kid Cudi, Estelle and Jazmine Sullivan. (While Thicke collaborated with Leighton Meester on her single “Somebody to Love,” the “Gossip Girl” star didn’t take part in Sex Therapy.) Thicke has already been getting rave reviews for the album — he’s just hoping no one is lying to him. “The album, as a whole, is actually the first time I didn’t write and produce everything myself,” he revealed. “I tried to create a new sound that I had never had before. A lot of people are telling me it’s the best album yet, so I’m really excited. I hope that they’re right!”