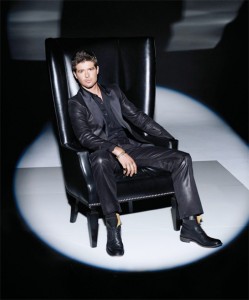 Those baby blues were covered up for a reason — exhaustion. ‘’I’m doing eight cities in eight days, they’re not coming off,” spies heard Thicke say under his breath. The same spies also heard his driver took him to the wrong Macy’s — downtown. Eek. No problem. The married father-to-be — wife Paula Patton, his high school sweetheart, recently announced the pregnancy — is a pro and put on a great show for fans. Thicke is particularly proud of his latest romance-inducing album, which boasts a slew of cool collaborators including Jay-Z, Snoop Dogg, Kid Cudi, Estelle and Jazmine Sullivan. “It’s in the tradition of Marvin Gaye’s Sexual Healing,” Thicke said.

“No matter where you’re at — whether you’re just starting a relationship or if you’ve been in a relationship a long time, a little sex therapy is a good thing.” Thicke, who taught himself to play piano around age 12, finds inspiration from the musicians he grew up listening to on the radio. “One of the first songs I learned was [Richard Marx’s Right Here Waiting],” he says, breaking into song. “Wherever you go, whatever you do . . . because it was one note. Then I starting finding the chords.” After the appearance, Thicke had big plans — to sleep. “I can never stay in Miami more than 48 hours,” he said. “I’ll get into too much trouble.” Teddy Riley Produced the Snoop Dogg Collabo.