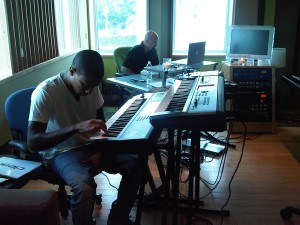 James Scheffer, better known as Jim Jonsin, is a Grammy Award-winning American producer from Palm Beach, Florida. He has produced hip hop music hits such as “Whatever You Like” by T.I., “Cuddy Buddy” by Mike Jones, “Kiss Me Thru The Phone” by Soulja Boy Tell ‘Em, “Lollipop” by Lil Wayne, “I Run” by Slim Thug. He is also the founder of his label Rebel Rock. He recently signed upstart Atlanta rapper B.o.B, known for his regional hit “Haterz Everywhere”, produced by Ribah. He is currently working on Jennifer Lopez new album for 2010.