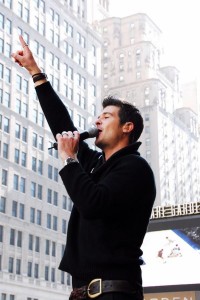 Robin Thicke has been interviewed by Examiner.com where he revealed that he’ll be going on a promo tour in December and will start touring in February or March and that his album been pushed back to December 16th. He also revealed a new track from ‘Sex Therapy’ which he says it’s his favourite at the moment. “You never have a favorite it’s always the last song you do. My favorite song off the album right now would be “Two Love Birds.” He also talked about his kid. Thicke offered possible name choices for the new addition. Thicke said, “If it’s a girl maybe Isabella, and if its a boy maybe Julian or something like that.”