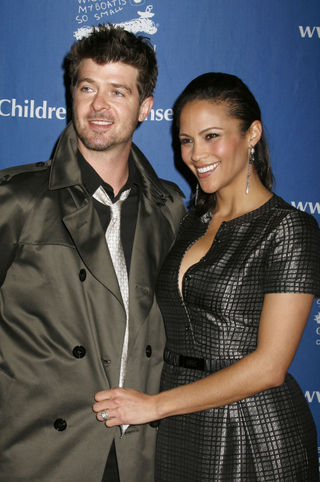 Singer Robin Thicke sure isn’t shy about his bedroom habits with wife Paula Patton. In fact, the singer credits her as the inspiration behind his fourth album, Sex Therapy. “She’s my sex therapist!” Thicke, 32, told Usmagazine.com Monday at his Svedka-sponsored New York City record Release Party at Butter nightclub. Thicke, who wed his high school sweetheart, 33, in 2005, says the couple put his song lyrics into practice. “We had a little bit too much sex therapy this summer,” he jokes to Us, as the “excited” pair plans for the arrival of their first child next spring and according to reports from people.com, it’s a boy.

32-year old Thicke said that he is already thinking of the life lessons he will teach his son. And teaching him how to respect a woman was one of the lessons he has in mind, along with teaching him music and being able to play him Biggie Smalls at some stage. “That’s the beauty of having a child,” Thicke said. Of course, the two are having the first-time parent jitters as well. When speaking about becoming a parent, Thicke said that he is afraid of not being patient enough. He then went on to say that his biggest fear, is being able to be there. The singer says he welcomes his dad-to-be duties. “We’re preparing the baby room, painting rooms and picking colors,” Thicke says. “Paula’s kind of got the baby taste in the family. I’m just going to sing to it and cuddle with it and teach it how to play basketball and talk to girls.”