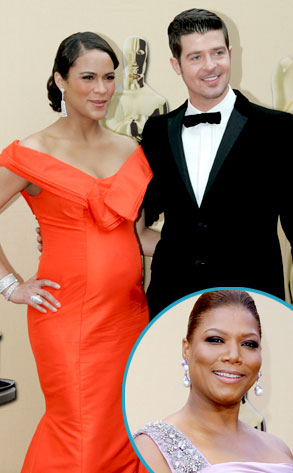 Queen Latifah is on the prowl for baby-blue party decorations. She’s hosting the upcoming baby shower for Precious star Paula Patton, who is pregnant with her and hubby Robin Thicke’s first child, a boy. So what does Latifah have planned? “It’s going to be pretty intimate,” Latifah tells me. “Not too crazy. Just close family and friends.” Patton is reportedly due in May. “She’s my buddy,” said Latifah, who costars with Patton and Common in Just Wright, an upcoming romantic comedy set in the world of basketball. “I love her. I’ve been watching her baby grow from the beginning.”

Look for some musical gifts to be on the baby registry. Are they expecting the little guy to be musical? “He will be,” Thicke assured me.“He will sing,” Patton said, adding with a laugh, “Look, no pressure!” Latifah has her gift picked out. “I have some work to do, but I’m not getting her clothes,” she said. “I have a special gift that I’m excited about.” And no, she won’t be called Aunt Queen or Aunt Latifah. She’ll be using her real name instead. Latifah smiled: “I’m Auntie Dana.”