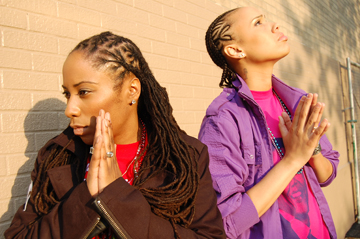 Remember that Neptunes tune Kin – Goodfoot feat. Pharrell from back in 2007, we asked ourselfes (I Did) who the heck Kin are, well all we knew was that, they’re 2 chicks rapping but I couldn’t find any further information about that duo, well that’s because they’re not called Kin. Their actual name is Kin4Life, an Hip Hop duo with a growing fan base and popularity, IQ and Nor. The two black and lesbian performers formed their group more than 12 years ago and have had to overcome many challenges as they built their empire. Early in their career, they both set out to remain true to themselves and who they are, unafraid to publicly embrace their race and sexuality. Refusing to change their appearance, swagger or identity, they passed up the opportunity to sign with a major record label.

As disappointing as this missed opportunity was, they brushed their shoulders off and masterminded their independent label, Noriq Records, and self-promoted their music. Their effort is slowly paying off. Kin4life has more than 11,500 fans internationally. They have appeared in popular magazines Curve and Out. They have been interviewed by AllHipHop.com, collaborated with recording artist Pharrell, and appeared in PBS’ “In the Life” and the documentary “Black Womyn Conversations.” Their video for “Make Up Girl” was named best video of the year by AfterEllen.com in 2008 and made Logo’s Click List top 10 videos. This duo’s music is meaningful, realistic and sounds great. Their CD is a must buy. It is available on iTunes and myspace.com/kin4life.